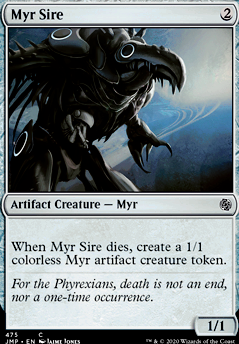 When Myr Sire is put into the graveyard from the battlefield, create a 1/1 colorless Myr artifact creature token.

Myr Sire occurrence in decks from the last year

Thanks! I hadn't thought of those cards when making the deck. I misread Grim Haruspex and Midnight Reaper when I put Myr Sire in the deck. you should check out my newest version of the deck and let me know how to improve it. I spliced it with hardened scales because I realized that a lot of the cards overlap between the decks. it doesn't work perfectly yet but I think it has potential. here it is. Hardened Summoning