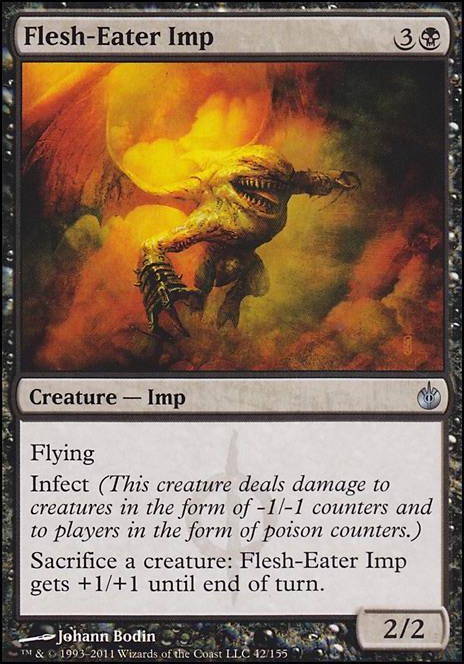 Flying Infect (This creature deals damage to creatures in the form of -1/-1 counters and to players in the form of poison counters.) Sacrifice a creature: Flesh-Eater Imp gets +1/+1 until end of turn.

Flesh-Eater Imp occurrence in decks from the last year

A Dark and INFECTious Crew
by Benjaromis

I had a 4 minute turn while running Meren, just trying to plan ahead and figure out how to sacrifice and reanimate creatures between Ashnod's Altar, Phyrexian Altar, Viscera Seer, and Flesh-Eater Imp.

I think this is an awesome deck! I do have a couple of suggestions though. the sacrifice outlets (Blasting Station, Altar of Dementia, AKA your wincons) are too few in the deck. Also, i would suggest maybe splashing a little black for maybe a Murderous Redcap for a win with any sac outlet at all. Flesh-Eater Imp is a good sac outlet and a wincon provided that you get the rest of the combo pieces. Also, between Noble Hierarch and Birds of Paradise you could probably throw in at least 2 Fabricate to get your sac outlets. Another card that's fun with this kind of deck is Chronozoa. Similar to Fabricate it wouldn't be impossible to just slide one or 2 into the deck, but chances are you wont need them. I was going to recommend Dark Depths but haha BANNED that was awhile ago i don't know why i didn't remember. My only suggestions are more sac outlets or some more ways to find them like Fabricate. Great and original idea, +1 from me!

Secondly, make custom categories. In my aristocrats deck, Lie, Steal, Cheat, and SURVIVE!, I separate these into

Once you do that, you understand what gameplans you want the deck to adopt and what ones just don't fit. You finally see the level of consistency that your list offers.

You are running eight sac outlets, which is fine, but you're missing Carrion Feeder . Is Flesh-Eater Imp , a four mana outlet that gives an alternate wincon, really worth running?

You have four mana rocks in the entire deck, not counting Ashnod's and Phyrexian Altar. The odds of you having those early on in the game to ramp are extremely low. Talisman of Hierarchy , Worn Powerstone , Coalition Relic , Thran Dynamo , Fellwar Stone . Run these and the clunkiness will be reduced. Oh, Black Market and Smothering Tithe are auto-inclusions.

Granted, I have no knowledge of your meta, but I do think that you could use a few more board wipes. Grave Pact , Liliana, Dreadhorde General , Damnation and Wrath of God oughta do the trick. Since budget is your concern, try Day of Judgment and Hour of Revelation .