everything consists of hate
by Ghettomcrunfast

Mind Eraser, No Chaser
by gr33nj3ster 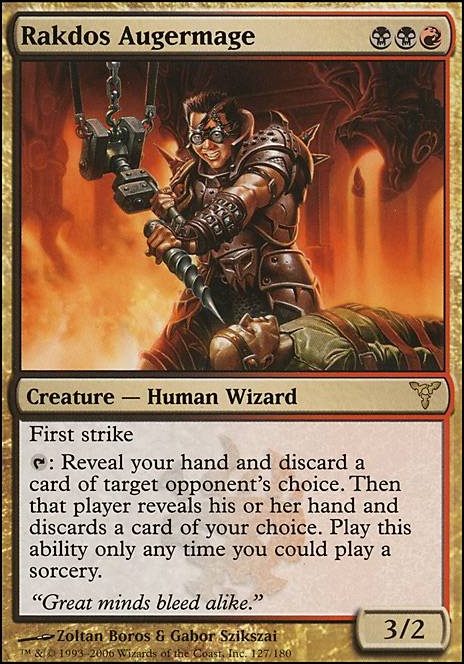 The Legend of Sisay
by BringerOTBD

Tsabo Tavoc was my first commander too! So many good memories with her. To help with the high mana cost Revel in Riches could be fun and also offer an alternate win con. In addition Thornbite Staff wrecks with assassins. Avatar of Woe is a beast of an assassin too.

Another creature that makes everyone hate you more (also isn't a bad commander) is Kaervek the Merciless.

But alas, commander deck finessing is a slippery slope that never ends.

This is very awesome, but I worry about being overloaded with products, that WotC may be focusing on quantity rather than quality; however, I shall make an effort to remain optimistic about it.

On a more positive note, I am very pleased to learn that there shall be a great number of reprints, since there are many cards that I feel need to be reprinted, and my most desired reprints are Book of Rass , Akroma's Memorial , Vedalken Orrery , Rhystic Study , and Reflecting Pool , but some other reprints that would be nice are Dromar, the Banisher , Undermine , Recoil , Fire Covenant , Fungal Shambler , and Tsabo Tavoc . I am certain that I shall remember more cards as time passes, so I shall mention them, here.

Also, is that a new incarnation of Baron Sengir? Yes, finally! I am certain that many long-time players have been waiting for years for this, and I know that I am one of those players; I have very high expectations for that card, since a character of his iconic status deserves nothing less than the best.

Will Commander Collection replace Signature Spellbook? I certainly hope not, since only two of those have been released thus far, and there are still many more characters who have not yet received their own.

No love for Tsabo Tavoc? Maybe not as a commander but at least in the 99.

Tsabo Tavoc so you can destroy your own permanents, trust me it's foolproof

my friend just built a deck based on this commander and it is a blast to play against he had lots of smaller eldrazi and would just drop a shit ton of creatures down. he is now starting to add in some of the big boys. what about Tsabo Tavoc

DerektheRed on DECIDING ON A RAKDOS COMMANDER ...

I'll second Olivia Voldaren - one of my least favorite commanders to play against. Main issue is she doesn't bring much to the table against non-creature decks.

Rakdos, Lord of Riots is great for group slug decks (not great 1v1), and can be kind of a less-good Kaalia. Linear but fast. I've never seen anyone do Rakdos with artifact creatures, but could be fun.

I've been wanting to try Tsabo Tavoc, even though the liabilities clearly outweigh the benefits. Maybe best as an addition to Lord of Riots...