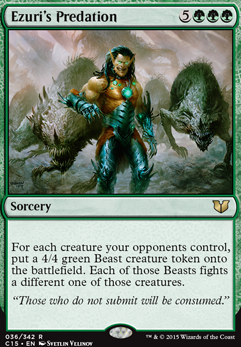 For each creature your opponents control, put a 4/4 green beast creature token onto the battlefield. Each of those Beasts fights a different one of those creatures.

It's Tatyova, Anakin! I Have The Card Draw!
by pokemonmasterjal 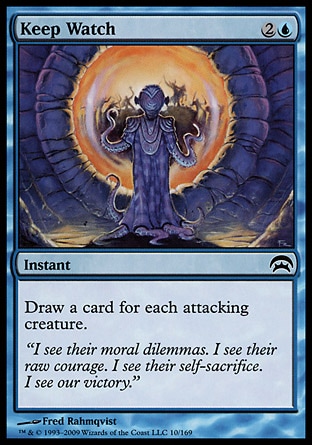 oups, bad paste, it's not Giant Adephage it'S Ohran Frostfang also change Arasta of the Endless Web for Ezuri's Predation

I haven't :). I did see it in action recently in a Game Knights episode. It did a lot of work in that game. However, I will not include it in this deck for 2 reasons: A) it is 8 mana and B) it is not a reliable board wipe. I want my removal to do just that: remove. Ezuri's Predation will be a huge blowout in some games, but in many others you'd wish you had basically any other board wipe in hand.

Have you considered Ezuri's Predation? :D

First things first, Mr. Infect it was a pleasure to watch you again and the others! Also thanks for all the work of the Commandcast-Team here.

When your divine synergies appeared and you already had 8 mana on turn 3, I knew immediately that after that play everyone would of course ally against you