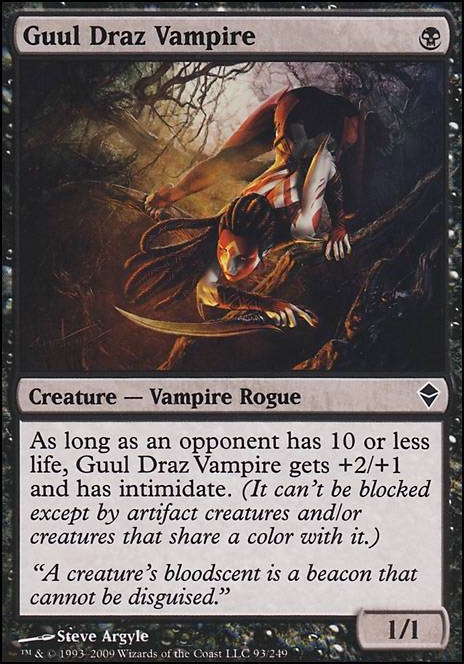 As long as an opponent has 10 or less life, Guul Draz Vampire gets +2/+1 and has intimidate. (It can't be blocked except by artifact creatures and/or creatures that share a color with it.) 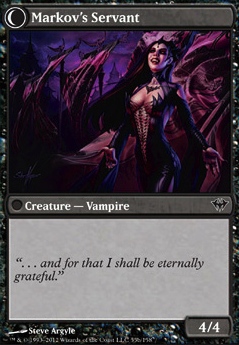 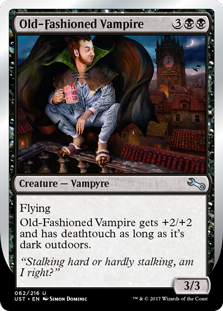 Maybe this would work? Vampire Lacerator Also, if ur not willing, I found a discard outlet: Insolent Neonate Few others: Knight of the Ebon Legion, Guul Draz Vampire Something to help with the 10L restrictions: Spawn of Mayhem

Welcome. This deck looks fun. +1 I might suggest a little less emphasis on life gain and a few more creatures and damage-dealing effects. Silence, as 1-of control type card, is a good candidate for replacement. Your mana curve looks good to me, but most of your 1-cost cards are ones that won't be played on the first turn, since they do things like bring creatures back or buff creatures. I'd look at swapping in a few 1-cost addressive vampires like Pulse Tracker or Guul Draz Vampire. Casual is my favorite format; the beauty of it is you get to do your own thing and come up with your own ideas. I think of it as kind of like budget Vintage in a way. Enjoy!