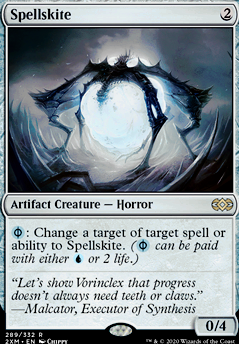 : Change a target of target spell or ability to Spellskite. ( may be paid for with either or 2 life.)

Spellskite occurrence in decks from the last year

firebolt22, Because it acts as a body, disruption, and bait for the low cost of two Mana. Spellskite is a solid card for spell redirection but it's not as efficient in this low to the ground deck. I built this with idea of being aggro and putting pressure on our opponent early in the game, I just don't think Spellskite applies as much pressure as Tidehallow. Tidehallow puts the opponent down two cards, the one I take from their hand and the other that will no doubt be used to remove the card from the battlefield.

Spellskite, Steely Resolve, Diplomatic Immunity, Curator's Ward or Sylvan Safekeeper just to name a few. Also cards that produce mana for your creatures do well in my Xyris

Ross Merriam played a very similar list on SCG's stream/YouTube channel a few months ago. Keep in mind, this was before the Companion nerf, so running Lurrus isn't as big of a benefit.

As Mundian suggested, Magnetic Theft is a solid inclusion. Also Stoneforge Mystic for fetching your equipments so you don't have to have as many of them in your main. This will give you more slots for things like Giver of Runes, Spellskite, Apostle's Blessing/Emerge Unscathed/etc., to protect your creatures from removal. Swiftblade Vindicator is also another great, cheap creature with double strike and trample.

Heya, I got around 110-120 games with my Xyris so far. After a few games I moved away from the grouphug stuff since that doesnât work too well. I would add Battle Hymn since that one goes infinite with any red discard wheel and underworld breach. Same is true for Phyrexian Altar but that one goes also infinite with your blue discard wheels. You should also add more protection in form of Diplomatic Immunity or Spellskite since Xyris is quite a good target for removal. Instant protection doesnât work well here really because you canât save them up in your hand for the moment you need it. Tidal Barracuda stops removals and counters during your turn, Whirlpool Warrior is another nice and cheap wheel to play. Teferi's Ageless Insight is quite helpful for drawing into another wheel. If you reach a critical amount of wheel effects (around 12-14) the deck really starts to take off and wins the turn after Xyris hits the field. My deck plays Xyris frequently turn 3, turn 2 of youâre lucky and wins the turn after if if you got one of the 5 cards that allow you to produce mana for your creatures, or any tutor to get them into your hand. Feel free to take a look at my list, it looked a lot like yours first but has changed a lot during extensive testing

You really need to drop some of your 5, 6, 7, and 8 drops. You'll notice a significant uptick in consistency by having more creatures come down before Marchesa. You should be shooting for 3.3 avg. cmc or less (you're realistically at about 3.6 counting Blasphemous Act as a 1 drop instead of the deceptive 9 it's technically counted as).

My suggestions would be more draw, ramp, and ways to immediately protect your creatures.

Ramp: I'd get all 3 Signets in here for more turn 3 Marchesa chances.

Immediate Counters: Spark Double can copy Marchesa for double dethrone or it can be used to abuse any etb/death trigger on everyone's turn instead of once per round. Haste enablers are great for getting +1+1 counters to immediately protect your creatures, consider Ogre Battledriver and Urabrask the Hidden. Mikaeus, the Unhallowed is like having a 2nd commander if you limit the number of humans you run. Spellskite is excellent for protecting key creatures and it's ability can be used as many times as needed to redirect the same spell/ability on the stack to lower your life where you want it.

Low Cost Sac Outlets: Diabolic Intent is arguably better than demonic tutor here (run both). Goblin Bombardment is an excellent sac outlet that only white/green can deal with consistently. Viscera Seer great sac outlet that sets up your draws.

Feel free to check out my list for more ideas. It's one of the top rated Marchesa lists on this site and has over 80 comments to sift through for more ideas. Upvotes on any of my decks are appreciated. Every Masochist Needs a Marchesa To Love Them