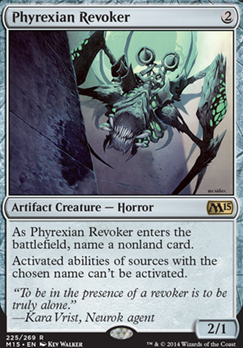 As Phyrexian Revoker enters the battlefield, name a nonland card.

Activated abilities of sources with the chosen name can't be activated.

Phyrexian Revoker occurrence in decks from the last year

Urza Budget Self mill
by marco-piatti What a Whale of a Wolf
by Quills 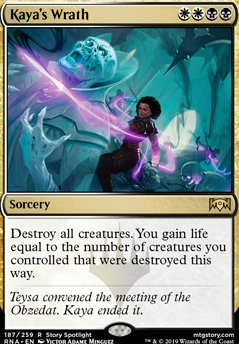 CaptainToll Fair enough. I won't argue with your logic behind Sorcerous Spyglass :)

As for the Reflector Mage and Phyrexian Revoker, I personally prefer the mage. Just because Revoker can be situational, and can not really be abused in the same way the mage can, as Revoker can only have one target unless you have a Panharmonicon on board or clone its trigger with Strionic Resonator.

Reflector Mage just seems a little more valuable in my opinion. Especially against tribal decks (ie. Slivers, that give each other additional effects or strength. Reflector can at least remove them for an entire turn, removing the effects from the other remaining ones).

Again though, it is all based on how you gear your deck. :) I like trying to put as much as I can back into your hand, and removing mana sources (rocks, lands) to force discards. Or just counter their synergy cards as they come out!

I recently imposed a little monetary embargo on myself due to just having finished my tenth commander deck ;D but my scope's already set on Trickbind believe me that. Reflector Mage I tend to switch in and out with Phyrexian Revoker. Also I like to think of Sorcerous Spyglass as a permanent version of Trickbind, which also gives you info about your opponents hands, which often is invalueable, PLUS it is fetchable via Tribute Mage and resettable for upcoming threats via bragoblinks.

Cantrips are always decent cards to run in place of more expensive options as they help you find the more central combo pieces, but you can also run cards that help you stop other people from winning. Karn, the Great Creator / Torpor Orb / Phyrexian Revoker and Pithing Needle are all solid inclusions and will stymie your opponents plans very effectively.