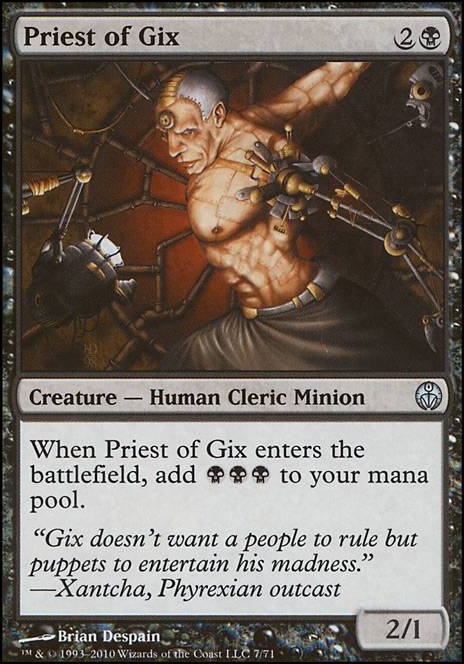 Priest of Gix occurrence in decks from the last year @iammute: Changeling Berserker is definitely a card I would include if I was looking to optimize the deck to near-cEDH levels, but I don't think it's what I'm going for here. As backward as it might sound, I don't actually want to go infinite more than I already do. In my playgroup, winning via infinite combo once every other night is fine, but people start getting a little too salty for my tastes if the combos happen more often than that.

@X-Factor11105: Oh don't worry, this deck is one of my forever decks. It's never getting taken apart, and I typically update it every time a new set comes out. I'm still in the middle of updating the description, but I should have an update with my new additions posted soon.

as for your suggestions:

Thanks for the suggestions both of you! I'm very picky about what makes the cut in this deck, but I'm always looking for new things to try out.

I hope you're still working on this deck! I'd love to know if you've made any updates since October.

I have an idea or two myself, maybe I'll give a try.

When Phyrexian Bloodpriest enters the battlefield, choose one --

Combination of Priest of Gix and Priest of Urabrask. Probably off-color to do this now that I think about it haha, green's the only one that's supposed to add other colors. Ah well, would be an interesting card regardless.

Why Priest of Gix ? Imo Blood Pet would be better in here. Less damage off of naus and bob, can ramp into a t2 teysa (or any other 3 drop), and could still combo for inf black mana with karmic guide and reveillark like priest can.

I would also suggest adding Mindblade Render because most of the time you should be able to hit someone profitably in cEDH games. Either that or the najeela player will hit somebody and you can profit.

As always, thanks for the suggestions!

Hmm. So, I've been getting a lot of Jarad, Golgari Lich Lord suggestions, and I guess the reason I haven't been including him is the high mana cost. Sure, 4 mana to play him, and 3 mana to sac Hogaak for 8 damage to each opponent doesn't sound like a lot, but it is. It'll take five Jarad activations to kill everyone outright, and this is assuming you have 15 mana, as well as at least 8 creatures and 20 cards in the graveyard to replay Hogaak, Arisen Necropolis 4 times. If I have that kind of board state, then I'd probably do something else with it.

And I'd imagine, that if you'd intend to use Jarad over multiple turns, that he'd paint a target on your back as soon as you dealt the first 8 damage to each opponent (but I guess, for me at least, just playing this Hogaak deck paints a target on my back. My playgroup has seen it win a bit too much, unfortunately).

Now the Corpse Dance is an interesting suggestion. I don't think I've ever seen this card before today. Would you mind elaborating the "clever tricks" this card can do? I can imagine an infinite combo with a Priest of Gix , a Panharmonicon and any sac-outlet.

On first glance, it looks like an investment that already requires infinite mana, but I could be wrong.

sjm: I implore you to come join the discussion on Discord.

Witch's Cottage is very slow for cEDH, and would NEVER deserve a slot due to it being a tapped land every time before Turn 4.

Wishclaw Talisman is unnecessary as a tutor, because like Scheming Symmetry , it helps our opponents. Not only is our stack interaction limited in Mono-Black, meaning we canât always respond to what our opponents tutor, we have no way to abuse and untap Wishclaw to get any real benefit from it. The density of tutors we have now is fine.

Priest of Gix is simply a high costed Blood Pet . Itâs not good enough, and itâs outclassed by every other ritual we have.

Snuff Out hurts us and isnât always free. Victim of Night makes sense and probably deserves a spot over Grasp.

i highly recommend Panharmonicon , it lets you go for infinite mana with Priest of Gix , Priest of Urabrask , Garna, the Bloodflame , and any sac engine