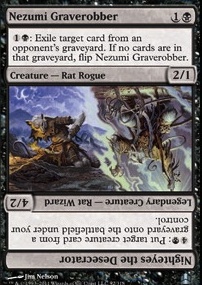 : Exile target card from an opponent's graveyard. If no cards are in that graveyard, flip Nezumi Graverobber.

: Put target creature card from a graveyard onto the battlefield under your control.

Nezumi Graverobber occurrence in decks from the last year

Mr Steal Your Deck 2.0
by clint_weastwood

There's also Gnat Miser in place of Drain Pipe Vermin as a solid one drop. Rat Colony in place of Swarm of Rats, Rotting Rats in place of Ravenous Rats, cut the Okiba-Gang Shinobi, for three as it guarantees you the discard, and you can use it with Pack Rat and bring it back. Nezumi Graverobber can take place of the whip, try to find a few slots for more. You can use this with Ink-Eyes and Marrow Gnawer alongside Pack Rat to bring them in, and allows you a little bit of a combo with Marrow Gnawer, Sacrifice it, make a ton of rats, bring it back. It'll help deal with graveyard based decks, and allows for some nasty interactions with Ogre Slumlord working as a one sided wrath. Then you need to find some room for Fatal Push and Thoughtseize/Inquisition of Kozilek/Duress and then with Piper of the Swarm you can take your opponents Eldrazi or whatever. With some sort of build like that it goes from being just aggro to synergizing with itself.

And outside of the disruption package can be purchased fairly low budget.

Life's Finale and Nezumi Graverobber seem fun, I'll have to see if I can fit them in! Thanks casual_competitive!

oh somone already said that, fuck. gimmy a second to find another card... uhhh idk Boneyard Parley sounds pretty synergistic to your commander, thats alota mana tho. Deadeye Tracker and Nezumi Graverobber could be epic, exile the creatures you dont care for so u have a better chance of getting a better creature. Life's Finale boardwipes and lets you get the biggest of boys from target opponents library.