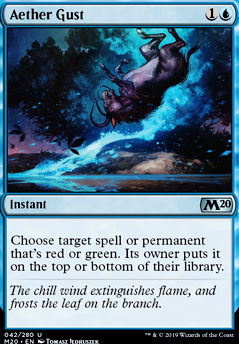 Choose target red or green spell or, red or green permanent. Its owner puts it on the top or bottom of their library. 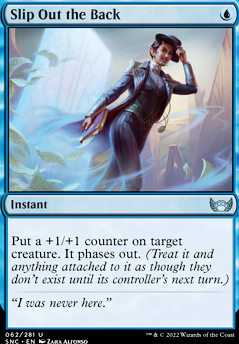 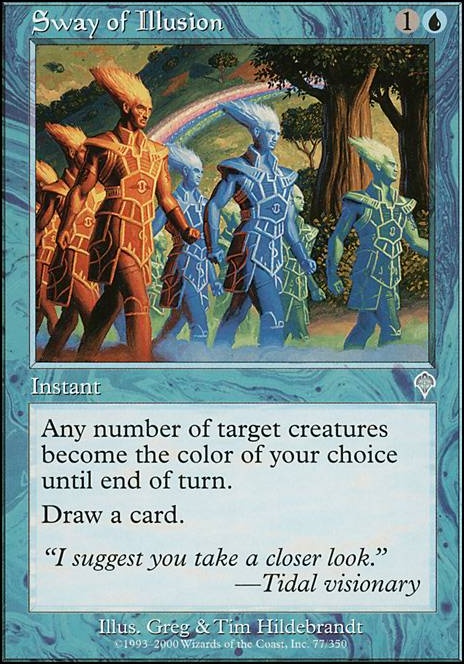 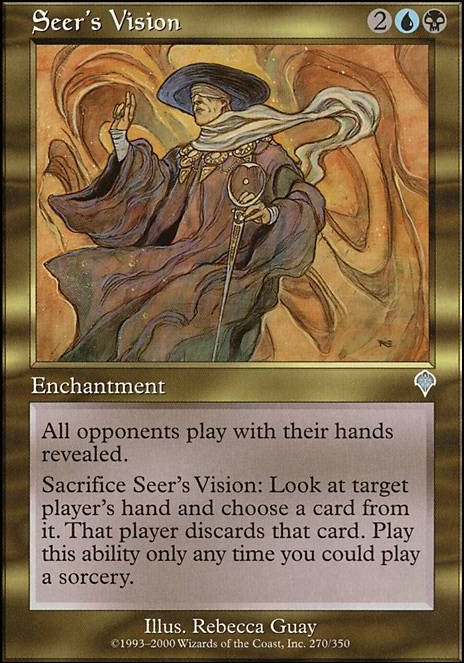 Very cool deck, I love the specter aesthetic! I'm gonna try Blackmail in my deck Pox Diamond. I would reccomend from your maybe board Drown in the Loch and Vandalblast for sure Grixis staples. Also have you ever considered Painter's Servant? Its got synergy with your commander making them discard all spells plus it makes cards like Pyroblast, Aether Gust, and Leshrac's Sigil even better.

I've played a little bit with Blue Tron since MH2. Aether Gust is good against Titan matchups and gives you a way to bounce a Blood Moon and unlock your Tron lands for a turn.

Also, once you've set up the Mindslaver lock technically you don't need to take any other game actions. Barring some weird card on their side, they'll be drawing a card each turn and you'll be putting the same Mindslaver back on the top of your deck. If you have them float their mana and pass every turn they'll deck themselves.

The main problem with Yorion builds comes with the sideboard, as you're filling the swaps into an 80-card deck, where you won't find them as often. Narrow hosers that you'd normally put 1-2 of in a sideboard become less effective. Aether Gust is primarily for Titan and Burn, and this version of UW handles Titan quite well already. Elspeth, Sun's Nemesis heals for 5 on turn 4 while Burn is on ~2 cards left after bringing us down to ~6-7 life, which can be backbreaking, and offers a recurring threat against some control decks.

As for Stony Silence, Affinity hasn't been doing well, and Hammer has plenty of ways around it, so it feels unreliable. Celestial Purge is decent, but one of the biggest threats coming from RB-based decks is Tourach, Dread Cantor, which this can't touch without Dress Down, at which point I'd rather use the latter to just avoid its ETB discard/pump and either fly over it or Verdict away later (less threatening at 2 power).

Dress Down has a lot of versatile applications, and while it can't be blinked and nonbos with our ETBs, can be used separately since the only things our creatures lose if already on field are Flying or Lifelink, and can also be boarded in if Spreading Seas is bad without losing cantrips, such as against 4c Money Pile, or UR Murktide. I had already gotten a set of these a while back, and can keep trying them out.

There is no way Elspeth, Sun's Nemesis is modern playable. I'd cut it for some other hate cards like Dress Down and Stony Silence (too bad you can't ever blink dress down), or maybe Celestial Purge/Aether Gust.

I think it's worth finding some room for Unholy Heat to hit walkers and beefier dudes (Omnath, in particular). Maybe -1 Spell Pierce, -1 Force, +2 Unholy Heat. As far as maindeck, it seems like you might also need a few more sorceries and/or fetches for delirium.

Regarding SB: I think Alpine Moon is MUCH better than Blood Moon, right now, and especially since the hammer matchup is usually rough. Anger of the Gods doesn't seem like where this deck wants to be; Fire / Ice or even Forked Bolt or something might perform the same function better, but honestly, I think you just want to press your card advantage and efficiently trade removal spells for threats.

Pithing Needle seems out of place, especially if you can use Unholy Heat in the same way to kill walkers, but with more flexibility. I also think Soul-Guide Lantern is better than Relic in a deck with Murktide, Snap, and DRC.

I think Chalice of the Void would be very important for rhinos, but Flusterstorm is also very good. As it sits, I'd go -2 BM, -3 Anger, -1 Relic, -1 Spell Pierce, +3 Alpine Moon, +2 Soul-Guide Lantern, +2 Mystical Dispute (or maybe Aether Gust, and a flex spot.