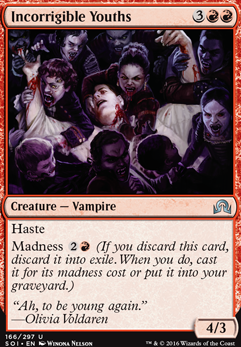 Pity itâs a costed card, otherwise Tinder Wall would be some decent acceleration. Thereâs always Simian Spirit Guide too, although neither gets (or keeps) a body in play to count toward the creature check:/

You can format this deck so that it's presented in a list format. Copy the deck list here into the deckbuilding section under the Mainboard tab, putting one card name per line like

and it will format properly.

For the deck itself, Simian Spirit Guide and Seething Song are currently banned in Modern, and Sneak Attack and Crystal Vein have not been printed in a Modern-legal set. If you change the format option to Legacy or Casual, it would be legal there.

RIP Simian Spirit Guide. May he rest in peace.

Have you tried Koth of the Hammer? I used to run one in my old mono red prison deck and he was quite strong.

1 Void Mirror in the sideboard would also probably be a good idea since it also hates on etron and elementals in addition to the other stuff chalice shuts down.

sadly mate combo wont work much no thanks to wizards fricken banning Simian Spirit Guide..I foun dout cause a deck I run 4x in wasn't modern legal anymore and its because they put it on the banned wagone cause O its not fair..really sucks