Protection from black and from red

Whenever another creature enters the battlefield, you may gain 1 life.

Legacy Of the Soul Sistas
by BotaNickill

The only substitute off the top of my head is Altar of Dementia, but that is more expensive(both cost and cmc) and does a worse job. Also Hair-Strung Koto but thats waaaay worse. I would probably play a different payoff if ur concerned about budget. Just from a quick look here's what I found:

Imo you can cut 1 of them with no significant impact to your deck, or even replace them all with Ajani's Welcome. At the end of the day, infinite creatures is infinite creatures. 95/100 times you execute the combo you wont need a finisher, and in the case that you do it isnt 100% certain you will have on. Ajani's Welcome is good enough where even if all the tokens are killed it is nearly impossible to lose the game, as the only way to kill someone with infinite life is to have infinite damage, and combo decks are rare in 60 card formats. Hope this helped :)

Knights need some love brother! LOL. I have a similar deck and spot removal and board wipes (not as common) are problematic but Mother of Runes has helped a LOT! She's less than 2 bucks and is a one drop and human-which fits. I know you're a budget builder-I am not LOL. Cavern of Souls would be a great investment, if you're willing to pony up, and will stop counter magic until they Ghost Quarter or Field of Ruin it. Still, would buy you some time. Any of the pro-red knights would be good in SB for burn. Guardian of Faith will stop board wipes or even spot removal since you get to choose your targets so you don't HAVE to phase out your whole field. That card was a game changer for me and it's a knight and cheap (also less than 2 bucks). Nice shenanigans too since he has "flash". For a 3 mana 3/2 that is white and cheap, a knight, AND flashes in to prevent removal he's pretty much the MVP of my deck (between him and Exemplar). I've read through your iterations and it feels like you landed on the right mix!! Your deck is essentially the same as mine except I do run Caverns, Mother and Guardian and a few more fetches to thin the deck. Nephalia Academy is SUPER CHEAP and, while it does not take the place of Leyline of Sanctity it does deal with discard strategies and used to sit in my SB but I run a couple copies main now. I have run this deck with Aether Vial but it just gets too "muddy" on early drops and invariably almost every competitive deck runs Stony Silence in SB so that makes vials pretty useless. Auriok Champion is a great (human) SB card and so is Sanctifier en-Vec especially with dredge decks. Paladin en-Vec is another good choice and kills Rakdos strategies. A lot of people will say that Knights isn't competitive in the current modern meta but I have a pretty competitive location where they get roughly 50 participants every Friday night for FNM and my knights never go worse than 2-2. I've had a few 4-0 nights and a lot of 3-1 finishes. I don't always play knights but when I do it's competitive enough to feel good.

Welcome to Modern. Your MB looks ok, so I'll give you some SB ideas.

Nice deck! Have you considered adding Unsettled Mariner, Giver of Runes or Ranger-Captain of Eos in the mainboard?

Unsettled Mariner and Thalia, Guardian of Thraben seem to have a very powerful synergy with one another. Also, I would consider swapping out Collected Company for more creatures or artifact such as Shadowspear or Sword of Fire and Ice.

How about Auriok Champion, Drannith Magistrate or Scavenging Ooze in the sideboard?

if you want to stay tribal, you could trade Mirran Crusader for Auriok Champion. keeps in the human type, has good protection, and has life support which is always nice. i would consider putting in Leonin Sun Standard for a group-boost in case someone plays something like Anger of the Gods, that way (if you have the mana) you can save a bunch of the creatures. Charge Across the Araba has a similar effect, but it's a one-shot with a HUGE risk that is minimal in the reward (3 out of 5 colors have a "fog" spell or effect available, and are used frequently competitively)

A cool take on D&T with a Humans subtheme. Especially like the Ranger-Captain + Mikaeus.

Not entirely sure what Flagstones of Trokair is doing here, it is basically just a basic plains that can make Blood Moon and Drown in the Loch better against you. 18 lands with no cantrips is also pretty risky with all of your three drops, you currently only have about 70% chance of hitting three lands on your third turn, meaning you're going to be playing from behind early a lot without a turn 1 Vial. If your having flooding problems just add more Silent Clearing

I'd also add a single Giver of Runes to fetch off Ranger Captain as seems good for board stalls/control even if it isn't great with the Humans, espcailly since cards like Auriok Champion and Sanctum Prelate is game over for a lot of decks.

Pacifism is pretty bad, and you don't really have any aura synergies with it. Iff you really want 8 removal spells, Journey to Nowhere is just way better. I think you could probably cut down to 6 total removal spells though since you have Skyclave Apparition. You could also try running Prismatic Ending, replacing a plains with a Sacred Foundry or something like that for a third color (and maybe adding some extra fetches).

I can't help noticing that you don't have any dig like Collected Company or tutors like Chord of Calling. CoCo is might not be the best here since you only have 22 hits which is far from enough. I think Chord of Calling is worth considering, especially if you decide to go for a more toolbox-valuetown build (maybe with some Sanctifier en-Vec, Auriok Champion, and Sanctum Prelate mainboard). It's probably fine without either of those but I just wanted to throw out some ideas.

You also don't have any real turn 1 plays, since Path to Exile and Rancor don't really count. Imo you should really have at least a few, so you don't start off every game already losing tempo on the first turn. The first suggestion I have for a 1 drop is Noble Hierarch, which makes all the types of mana you need early game and has some use mid-late game with exalted. She can also make blue mana if you want to exile a 3 cmc permanent with Prismatic Ending (so the foundry is probably not needed). My other suggestion is Esper Sentinel, since he either stalls the game by taxing your opponent or gives you tons of card advantage. Stick a Rancor, Angelic Destiny, or Wilt-Leaf Liege and you'll be drawing cards all day. 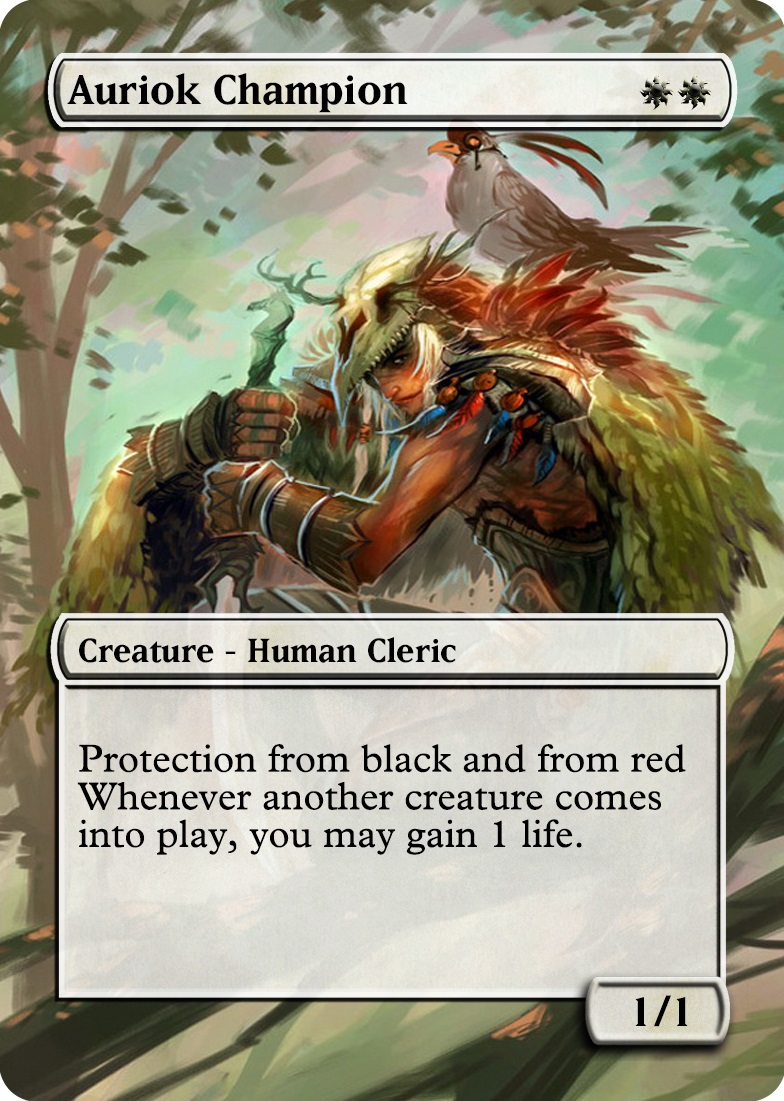 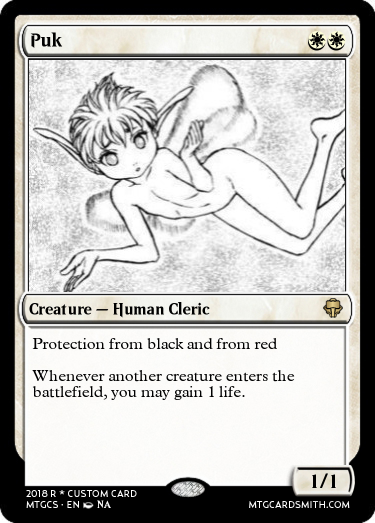 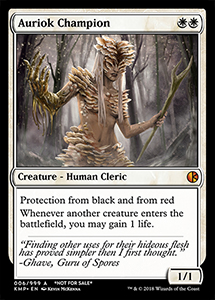 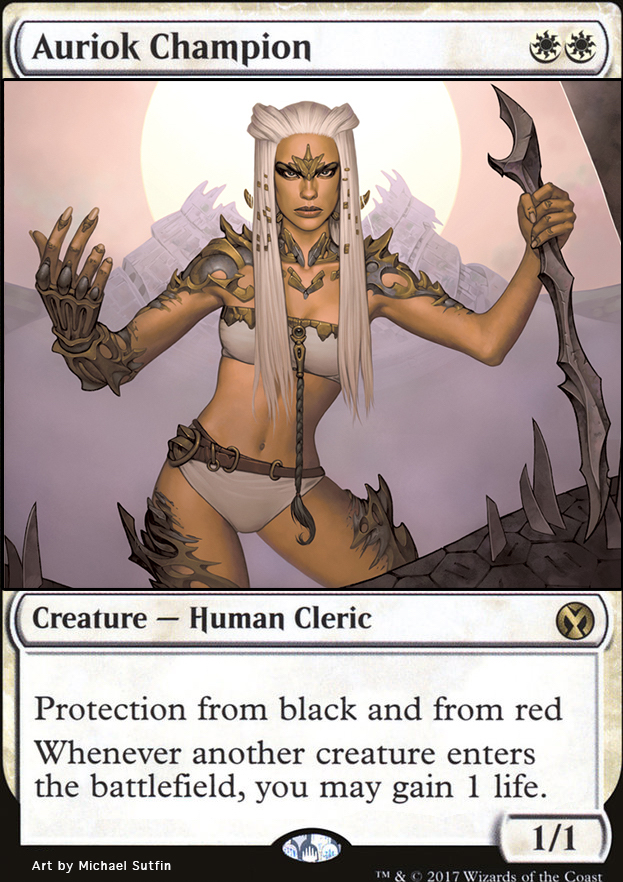 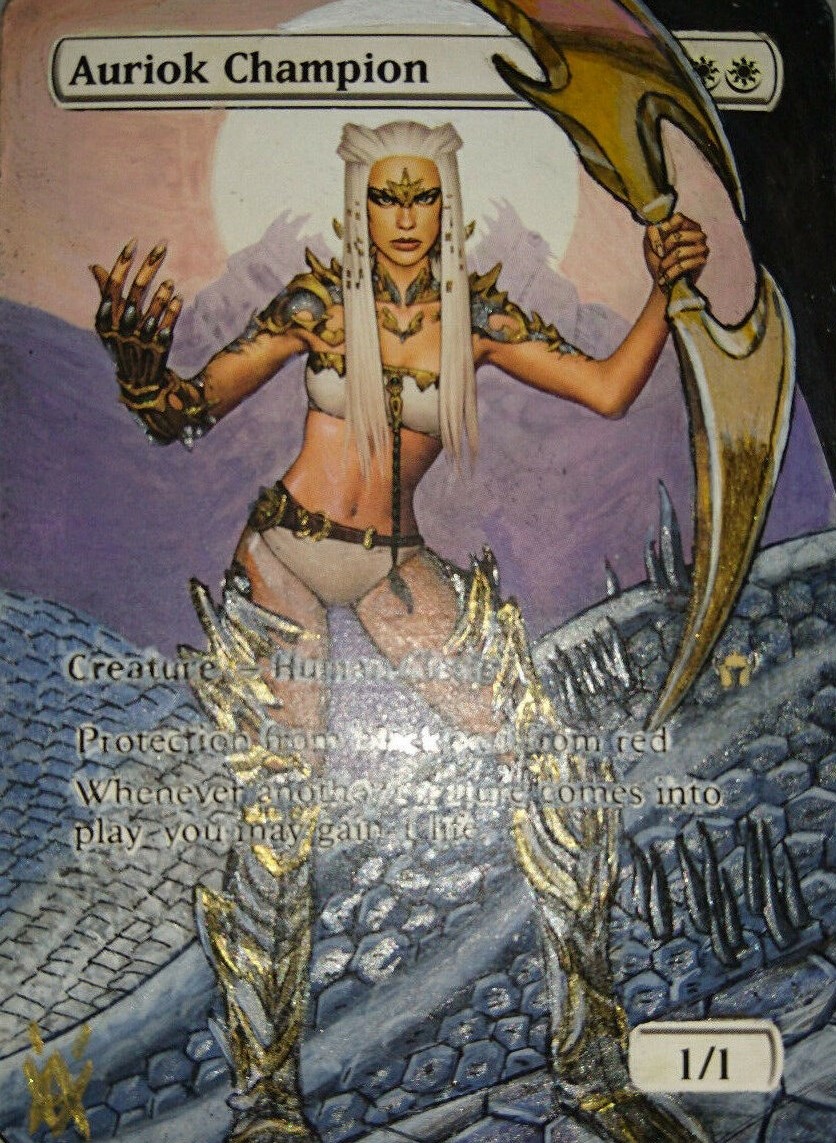