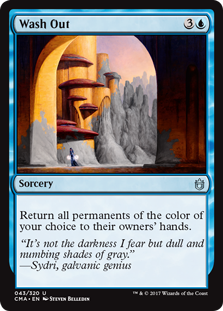 Return all permanents of the color of your choice to their owners' hands.

Art of throwing
by Daschna

You have Flood of Tears --also consider Wash Out , Devastation Tide , and Fade Away . Crux of Fate and Deadly Tempest are good budget board-wipes ("wraths") as well. Necromantic Selection is expensive but it has the upside of being able to steal a commander. In Garruk's Wake and Plague Wind are budget too but they're sooo expensive, mana-wise.

I would switch Doom Blade for Control Magic , personally.

Actually now that I think about it. AEtherize is worthless as a free cast. Maybe Wash Out.

I_Want_To_PlayAllTheDecks poor poor uneducated Gobbo Governor. When will you learn that your actions have consequences? Wash Out your dirty Ears Gobbo man.

Cards to consider: Kiora, Behemoth Beckoner cheap usefull + draw engine Repudiate / Replicate make a cheap copy of your Stormtide or any other usefull Wash Out Just Dont pick green or blue +++ ALL PERMANENTS (lands to) Migration Path for Explosive Vegetation same but one has added cycling ( you never know )

Oops I forgot to include Coastal Breach, but still if I only have to worry about Evacuation, Curse of the Swine, and Wash Out (there are more, but these three I see the most) then I am a-O.K with that.

Thanks for the suggestions DreadKhan. I haven't used AEtherspouts yet, but I have had success with Wash Out in an old Bantchantress deck I had. My meta runs enough multi-colored decks, that I can still remove some impactful stuff across the table. I wish it was an Instant, but oh well.