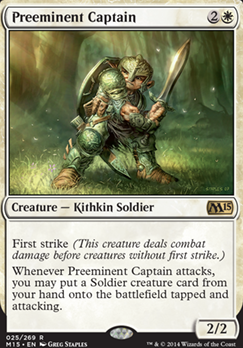 Lieutenant to Win It
by Affinity_for_MTG 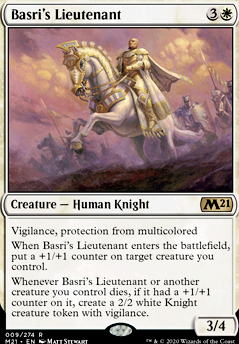 TypicalTimmy on So, is "Elspeth, Sun's Nemesis" â¦

If we look at her abilities per mana cost, we basically have you choosing one of the following:

Barsi is objectively better, in literally every single way. So I doubt Elspeth would see play, unless used as filler. Even then, there are better Elspeth Planeswalkers to choose from.

When ~ enters the battlefield, target noncreature artifact you control becomes a 5/5 artifact creature until end of turn.

At the beginning of each end step, if a planeswallker entered the battlefield under your control this turn, target player loses X life and you gain X life, where X is the number of artifacts you control.

Make a planeswalker that doesn't have a plus ability but has another way to add counters (ex. Elspeth, Sun's Nemesis)

I like the Murderous Rider as a four of as well. For the planeswalker package I would recommend to look into Elspeth, Sun's Champion and Elspeth, Sun's Nemesis. I think The Nemesis Elspeth could be a better Baneslayer Angel since it can gain you life, but also buffs other creatures and/or creates tokens (It also costs one less mana). If this were my list I would run something like this.

Thanks! I was toying around with Grim Haruspex a little bit, and I think I will include it as my search to make a human-token-based aristocrat deck simply isn't working out as well as I'd hoped. I saw Falkenrath Aristocrat, I suppose I just didn't see the value in it, but you pointing it out made more sense than I initially thought. I made this deck at like 2am, so I guess I overlooked the fact that the tokens were Soldiers, not Humans like Elspeth, Sun's Nemesis makes. I'll also certainly add Sunhome, Fortress of the Legion.

I'm working on a deck with the same commander and I'm very excited.

Some of the other cards I was looking at that might be interesting.

Falkenrath Aristocrat, a second Silvar but it with wings and haste

Sunhome, Fortress of the Legion, surprise double strike on the commander.