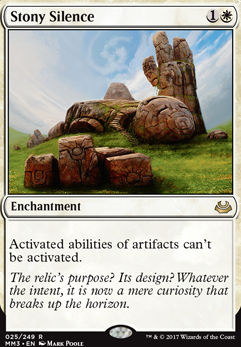 A Practical Guide to Demon Summoning
by TheCatHerder

The Wrath of Mul Daya - EDH
by OP_Sigma

Kor Outfitter is not there to be fast. Its there to get around effects like Stony Silence, or Collector Ouphe, which stop equipping artifacts, as equipping is an activated ability. Outfitter is essentially copies 5, 6 & 7 of Sigarda's Aid.

Also the deck's main goal is NOT to be as fast as possible. As thats what causes the classic RW glass-canon version to be unplayable competitively.
This variant was built to be more resilient.
Losing to a single Fatal Push, or Lightning Bolt is simply not acceptable in modern. I attempted to solve the problem by:
1# rebuilding the deck in such a fashion that allows drawing a lot of cards, and thus replacing assets that get removed from the battlefield (Sram/puresteel + cheap artifacts)
2# have redundancy in key effects, be it Golem-Skin Gauntlets for the hammer, outfitter for sigarda's aid, or Sram for paladin.

@psionictemplar I have never heard of Culling Scales... that just seems like a very neat card in general lol....I suppose it isn't just/only about being slowed down and more so the fact that I flat out couldn't think of a single practical means to get rid of Stony Silence (in Mono-Red) on my own; but the community as always pointed out many ways to handle it.... although its probably best just to play around/through stony silence and not worry about it... its one of those cards i forgot about and when it came down and I couldn't get my draws as i am used to it just bugged me!

@DragonSliver9001 I got the idea/guidance for mainboarding Pyrite Spellbomb and Relic of Progenitus from a primer here on tappedout. Do you have other recommendations for either utility/cantrips?

I have a few more outside the box suggestions.

If you are staying mono-red there are still some more modern answers that fit more readily into your deck.

You could sideboard in Capricious Efreet. Its a little pricey but gives you an attacker/defender that at some point is going to kill your opponent's stuff.

Speaking of attackers, no one has mentioned using attacks to get rid of the enchantment with stuff like; Argentum Armor which is decent or worse, Worldslayer.

I also did not see if these were mentioned; Ugin, the Ineffable can do the job or even Meteor Golem.

Or ultimately, any creature with annihilator, like, Ulamog, the Infinite Gyre.

They are all high mana cost but coming out of your sideboard for games versus the Stony Silence deck are viable options and most of them do not hurt the rest of your deck's playability.

I think if your opponent has sided in Stony Silence against cantrips, you're already quite ahead. As you say, you can play through it; that's a pretty poor sideboard card. I can't think of which modern deck should be doing this, but if their goal is to side in Stony Silence to slow you down, side out all but the Mind Stones for other proactive cards.

That looks like a problem with your SB to me; it looks like you don't have a lot of good options for when you need more gas. Chandra, Torch of Defiance is a good option. I like the look of the new Valakut Exploration or possibly Valakut Awakening Â Flip.

In colorless you basically have Spine of Ish, Blast Zone, Scour from Existence, and Karn Liberated (probably missing some), of which only one is playable in modern (for the average deck). I'd recomend just splashing if at all possible, but if you want the deck to remain mono red or there is somthing else preventing you from changing color- Blast Zone is your best answer.

Alternativly you could try out Dragonsliver's sugestion to play around Stony Silence rather than destroy it.

Does anyone know/have any suggestions for a Mono-Red deck with a fair amount of artifacts (with activated abilities) to deal with Stony Silence?

I decided to rebuild my Skred Red (Metalcraft sub-theme) deck back into paper and can play through stoney silence but it can be a general nuisance and slow me down.

Ok if you're gonna go into legacy there is a huge pool of cards that you can use (I'm more of a modern guy myself so I'm not super experienced with this but I'll try to help as much as I can). First off, Swords to Plowshares best white removal in legacy im pretty sure. You could only run a singleton of Blood Moon and two Shared Animosity to make space for a bunch of Enlightened Tutors which can also fetch later sideboard hate like Suppression Field, Rest in Peace, Stony Silence, Crackdown, etc. Not sure if you want to go in that direction though. Pyroblast/Red Elemental Blast are great for sb but also pretty good in mainboard since everyone sucks Brainstorms and Force of Wills dick in legacy as far as I can tell.

Mana costs don't seem too restrictive, but adding some dual lands would help consistency a lot. If you have no budget, there's shit like original duals and fetch lands. Other options are shock lands, check lands, fast lands, filter lands, horizon canopy lands, scry lands, etc. There's also stuff like Karakas and Ancient Tomb that everyone runs for some reason. Maybe Cavern of Souls for goats? although you only have a few actual goat creatures so it won't be great.

Thanks for your input (for real its really appreciated).

I had Energy Flux in the deck for a while, I removed it because I felt like it wasn't that usefull (I play in a stax heavy meta), and I found out that I was better off running single target removel like Oblivion Ring, so the same logic applies to Stony Silence.

Overburden will be play-tested, thanks for the idea.

I am already running Eldrazi Conscription.

And I won't play with Humility because I can win with Primal Surge and Thassa's Oracle and that wouldn't work with Humility in the deck.

That being said if you have more suggestions, I'm all ears.