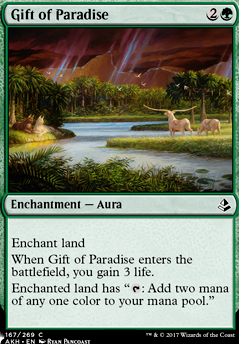 When Gift of Paradise enters the battlefield, you gain 3 life.

Enchanted land has ": Gain two mana of any one colour."

Gift of Paradise occurrence in decks from the last year 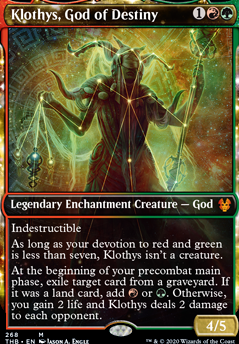 storro thanks for the suggestion.

I will admit that The Binding of the Titans is the most hit-or-miss card in the deck. I have it in the deck because

I do like Gift of Paradise tho, I'll have to test that card out in the deck. Thanks again for the suggestion!

iammute - You're quite right, and I've edited the description. I may have been thinking of the Gift of Paradise wording, which I believe works the way I was imagining. Unless I'm still mistaken, Mana Reflection does have advantages with the filter lands and Lotus Field, Gaea's Cradle and Serra's Sanctum, at least.

I know about that lovely little combo, I use Verdant Haven or Gift of Paradise though in its place as I donât actually have Utopia Sprawl

Playing with a few ideas for when my 4 Nyxbloom Ancient come in from good ol usps. Any other recommendations?