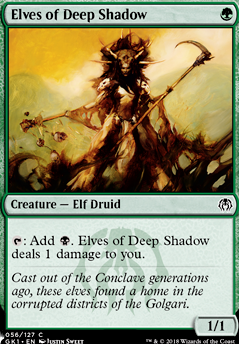 Gain . Elves of Deep Shadow deals 1 damage to you.

Elves of Deep Shadow occurrence in decks from the last year

Sweet Deck! If you're trying to make the deck more competitive, I would suggest cutting Gisa and Geralf, Rescue from the Underworld, Sultai Soothsayer, and most of the artifact ramp for cheaper ramp that doubles as creatures for Sidisi hits, like Deathrite Shaman, Elves of Deep Shadow, and the like.

Thanks for the advice, multimedia! I did some thinking on the deck and made a few changes which - I hope - make the deck a bit better. I did it with a heavy heart, but I cut both No Mercy and Phyrexian Obliterator. Even though I love them, they weren't really helping, especially the obliterator.

I also got rid of a few other cards you mentioned. I added Fauna Shaman and Elves of Deep Shadow, as well as Protean Hulk, and Erebos, Bleak-Hearted, although I'm not super confident about the latter. He's kind of okay, both as a sac outlet and draw engine, but I did some testing and he was never really spectacular. I'm actually having some trouble with the 4CMC spot. Pattern of Rebirth seems pretty cool, but it's mostly a one-and-done effect that needs a bit more setup than Eldritch Evolution. Also I don't want to cut too many creatures.

I also replaced Greenwarden of Murasa with Noxious Revival. It's a much easier way to recur stuff that Meren isn't able to get back. At some point I'll probably replace Erebos with a Sylvan Library and Rune-Scarred Demon or Shriekmaw with a Walking Ballista. Oh, and I'm planning to switch from Torment of Hailfire to Toxic Deluge or at least Damnation. I also added Massacre Wurm -- I love how he interacts with Sudden Spoiling.

When it comes to mana base, I just have much more black pips in the deck, that's why I'm using more swamps, but maybe I'll go with 7 forests and 11 swamps. I'll surely add Verdant Catacombs too, but I already went over budget like four times with this deck, so I'm trying to take it slow :D

In your opinion, does the deck look better now than it did before the changes? Thanks again for your advice! It's been really helpful!

Hey, your deck is really good, but if you're looking for some upgrades here's some suggestions.

Some expensive cards within the budget of $600:

Viscera Seer + Mikaeus, the Unhallowed + Walking Ballista is a creature infinite combo with Ballista as the win condition. In my opinion by adding just one infinite combo as a win condition it makes a deck better. Because all the cards of this combo are creatures then they can all be reanimate or recurred by Meren. I'm suggesting this combo because you already have Mikaeus and Seer.

Ideally adding these 10 cards would improve your deck. Fauna Shaman is the budget/less good alternative to Survival of the Fittest.

Many of these suggested cuts are high CMC redundant creatures which you don't need with Meren.

I mean to me it just looks like one of those decks you see under UG food chain in the various tab on the discord with a splash of black. You get better tutors with black and a few more dorks in the form of Elves of Deep Shadow and Deathrite Shaman but I'm not seeing how the commanders themselves contribute to the game plan. Sure having an 9th card is great but there are better options for the 9th card. Oh and I'm not about slow grindy decks I love speed and efficiency. Though I will state it again that the deck looks strong just the commanders I'm not really feeling em. Though perhaps if I played against it I'd change my mind.