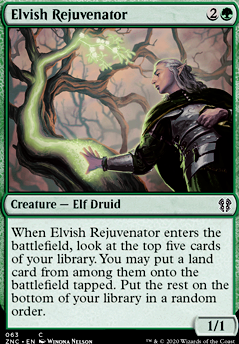 Obuun the Landfall Bomb
by bem77

fmastrome2008 - I really appreciate the feedback!

1) Helpful suggestions on interaction with Risen Reef. My hesitation with both Mulldrifter and Shriekmaw was that I don't have a ton of recursion so would rarely evoke them. That's why I opted for Fblthp, the Lost (same cost as Mulldrifter cast via evoke but stays on the battlefield) and Ravenous Chupacabra (1 mana cheaper than Shriekmaw and without the restrictions) respectively.

2) Love this! I literally just got a Sire of Stagnation and was fiddling with the deck trying to figure out where to slot it in. Was thinking about removing Phyrexian Delver - thoughts?

3) Those are all great suggestions and will help me better focus on that win condition. One of those is an easy upgrade over Elvish Rejuvenator. I'll definitely think through how to slot the other two in - will probably require going through some personal grief over letting go of cards I like but are probably less efficient :)

Thank you for your comment! I love deck building and I really appreciate the input.

I've actually been meaning to update the description as the Deadeye combo no longer is my primary win condition and I've made couple changes to the deck. Because of the power level of my meta I've decided to go a landfall direction with potential combo finishers, rather than a defined combo deck. A couple of these are above my budget or I've already chosen to leave them out. Instead of running sorcery ramp like Kodama's reach or Cultivate, I'm running cards like Omen of the Hunt, Elvish Rejuvenator, Springbloom Druid, which are conditionally better and allow me to abuse their ETB triggers. However, I hadn't really though about Temur Sabertooth, Shrieking Drake, nor Thassa's Oracle and I'll be adding those to the deck as soon as I can get my hands on them.