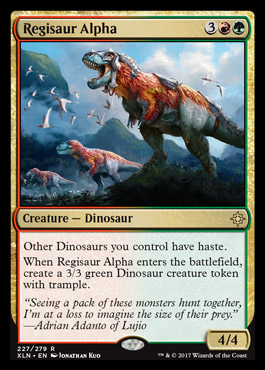 Other Dinosaurs you control have haste.

Regisaur Alpha occurrence in decks from the last year 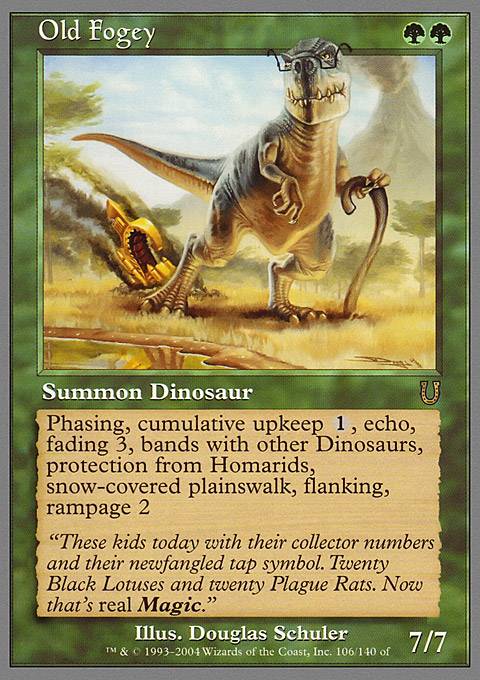 Hey DivineKhaos, this is a really cool build and I like the synergy with Shields of Velis Vel!

The only suggestions I'd have is Titanoth Rex which would give you the cycling flex option.

Rhythm of the Wild and Regisaur Alpha are also a great enablers for your creatures.

One other thought is if you need a way to get to Shields of Velis Vel to counter any board wipes or other crazy situations, Sunforger could be a potential option.

Great job overall. This definitely gets a like from me!

I do sincerely want the Dino-might to bring the thunder and will try it out. Quartzwood Crasher is a cool card after all.

MrBoombastic: your sarcasm isn't needed. don't tell me my deck would work better with certain cards when you clearly misunderstand the theme. the attackers need trample for Quartzwood Crasher, so Regisaur Alpha is a no-go. the land count is most certainly not on the lower end. not sure why you'd even say that. 24 is the highest you'll see in any deck that doesn't either aim to specifically abuse lands, or use cards that allow extra land drops per turn. 24 lands statistically averages 4 lands by turn 4.