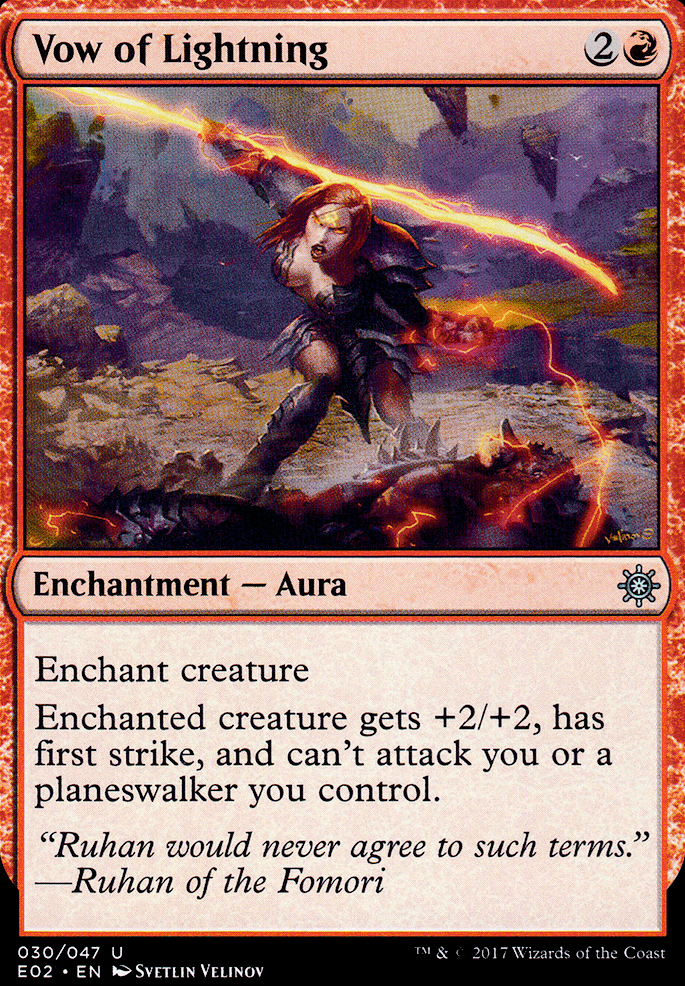 Enchanted creature gets +2/+2, has first strike, and can't attack you or a planeswalker you control.

Vow of Lightning occurrence in decks from the last year

Gleeock on Someone thought Mogis is Rakdos ...

Well, If you switch back to Xantcha: then my licid statement still holds true. + my other suggestions. + Gift of Doom will be great. + Visions of Brutality + Vow of Malice + Vow of Lightning . Soul Conduit has been fun in my Xantcha deck. Do I think these are major game winners? Not really, but they are high levels of political & unusual decision forcings. And on the plus side with Xantcha, you don't have to load a deck with card draw for the sake of draw, since you should plan on activating the commander for this reason. Scheming Symmetry seems like a must-add for political mayhem. Tutors can actually be fun in a deck that doesn't contain tempting "win now/combo" cards.

For your second question, yes, that is how Sylvan Library works - you may keep one of the three cards and pay 0 life, or 2 paying 4 life, or all three paying 8 life.

Two points of clarification: Sylvan Library does not differentiate between the first card you draw for turn and the two extra you draw from the Library. You can choose to put any two of the three back on top of your library, including the first one you drew normally for turn. In fact, if you have another effect that draws more cards before Sylvan Library's trigger (such as a Phyrexian Arena , which draws you a card during the upkeep step) ANY of those cards are eligible to be put back to avoid loss of life.

Second, you must keep all cards drawn that turn easily identifiable - meaning they cannot be placed into a pile with the rest of the cards in your hand, until after Sylvan Library has finished resolving (to prevent people from keeping all three cards they drew, but putting back a card that was already in their hand to avoid paying life). Usually, I put my hand facedown on the table, then draw three, look at them and decide what I want, then pick up my old hand to add the card/cards I'm keeping to it.

You should run the Vow cycle, particularly Vow of Lightning , so you can put it on Ruhan and make him agree to such terms. :)

I would argue the vow cycle of cards should be on here like Vow of Lightning keeps the most dangerous creature from going after you and makes it go after opponets.

PhotogenicParasympathetic on I did it. I finally ...

Today, I lived the dream. I put a Vow of Lightning on Ruhan of the Fomori . He finally agreed to my terms.