Bestow 5UU (If you cast this card for its bestow cost, it's an Aura spell with enchant creature. It becomes a creature again if it's not attached to a creature.)

Hypnotic Siren occurrence in decks from the last year 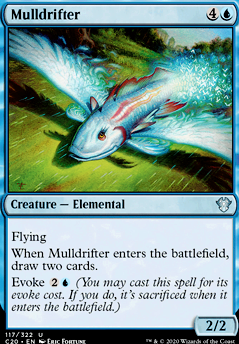 Am becoming ninja
by Xiaolongbao 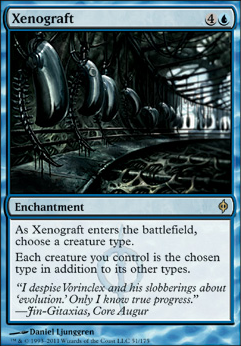 Damn Skulloelegy, I didn't know about Dryad Sophisticate ! Definitely worth considering. The 2 CMC is a little high (lol) but I agree, non-basics are everywhere and it does hit for 2 damage. Might be worth the higher CMC.

mlequesne, I entirely agree with you about Burgeoning and Exploration , it's just hard to make cuts to fit them in. I think the high volume of evasive creatures is key, so I don't want to reduce that. Can't take out more land. I'd also like to make room for Guardian Project and Bident of Thassa which I see you run in your Edric deck but again... is it worth removing some disruption for them? Maybe?

alu4, If you sort the deck by card type, you'll see there's only one Hypnotic Siren . By default, my deck is sorted by custom categories and the Siren serves two categories: Both as a Cheap Evasive Creature with flying and Disruption to my opponents - I love using it to steal someone's commander ;)

They caught on to telepathy. It was good while it lasted. Anyways... I cut Merfolk Spy and Hypnotic Siren for Memnite and Cloud of Faeries and swapped tele for Familiar's Ruse . Free dudes give a crazy good start and pair nicely with ruse. I had a game where i untapped my elvish guidance land with cloud into an ezuri. Also the free dudes super cantrip with beastmaster.

This deck is actually widespread enough that it has a name; Bogles! But for now, some tips-

Sphere of Safety , Bruna, Light of Alabaster , and especially Hypnotic Siren are risky is modern- it's such a fast format and your opponent may well have no large creatures.

Ghostly Prison would probably do ya better than Sphere of Safety and Mesa Enchantress is probably better than Hypnotic Siren and Bruna, Light of Alabaster (none of your auras cost much to equip anyway, and a little more draw never hurt anyone).

That being said, enchantment voltron is a really fun thing to play in commander. I played it for a while. Trying to find a decent new commander.