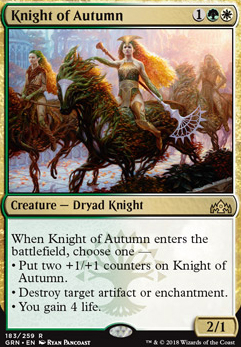 When Knight of Autumn enters the battlefield, choose one â

Knight of Autumn occurrence in decks from the last year

I would try and improve the pod chain from 2-6. I don't see too many creatures that you would like to pod into and pod away. I would also suggest some more land ramp. To reach both of these goals I would personally add some of these cards: Wood Elves Yavimaya Dryad Eternal Witness Karmic Guide Reclamation Sage Knight of Autumn Restoration Angel Felidar Guardian Eerie Interlude (To protect from Board Wipes, while also getting ETB triggers again) Ghostway (Same as Eerie Interlude) Kodama's Reach Cavalier of Thorns Vexing Shusher Selvala, Heart of the Wilds Natural Order Nature's Lore Green Sun's Zenith

Tutoring for Caterpillar is pretty clever. I think Knight of Autumn might be better since it's the same mana, can be fetched with Wish, and has additional modes. It's pretty costly though, because you'd need 3 additional mana to go off and you cant just wait until next turn (since you've discarded your hand or have to pay for Pact). Is there an easier way to use it?

Im not sure Kinnan is worth it since the deck doesnt have a mana problem. More importantly you need as many free spells as possible, and Kinnan adds 4 non free spells just like Spirit Guide. Secondly, SSG doesnt require another piece to produce mana. If we replaced with Kinnan, we lose (not exactly but you get what I mean) if we dont start the game with Kinnan.

Knight of Autumn is solid in these colors. I am essentially running a mono-white version of this. Gleam of Authority and High Sentinels of Arashin are all-stars in that deck so they would probably work here as well.

SwiftDeath thanks for checking out my karador deck. This is my main deck for about 2 years now.And yeah Apprentice Necromancer and Wake the Dead where mind-blowing the first time i discovered them and tried them. they are realllyyyyy good with Entomb.
Sun Titan is on my swap radar but not for the immediate list.I use him as way to bring precious artifacts/enchantments back or as a bad way to ramp.
Blood Artist / Zulaport Cutthroat awlways felt non needed for me. Once i have a loop in place i can:
A.Acidic Slime to remove all lands
B.Knight of Autumn gain infinite life
C.Saffi Eriksdotter + Protean Hulk put all my creatures from my library into play.
D.Sun Titan /Renegade Rallier bring back a milled Altar of Dementia and mill everyone out.
and it doesn't matter what my opponents do.I have a loop if they play a land i will destroy it again,so my playgtoup knows. Once i declare i have an infinite loop we call it "GG" and go for the next game. So lifegain effects seems like wasted slots for me. I will look to your deck also. Keep in mind i play in near-competitive meta (no Mana Vault or other extremely expensive stuff) so besides having a really bad hand my deck does fairly well :)