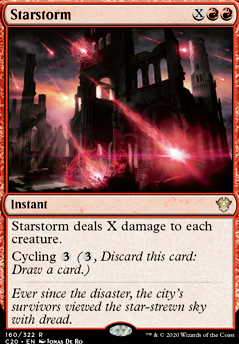 Starstorm occurrence in decks from the last year Well swarm isn't a problem because all the board sweepers are gonna take care of that. Cards like Pyrohemia, Powerstone Minefield, Lightmine Field these are to much to handle for any token or goblin deck. Plus theres Blasphemous Act, Mizzium Mortars, Arcbond, Magmaquake, Starstorm, and Fault Line. Unless the swarm is flying you'll be alright. If aristocrats is the problem add a lil bit more graveyard hate. Graveyard decks are some of the strongest decks in edh.

The cards I've been looking at, are the ones in the maybe board. I updated it today.

You should definitely include Dryad of the Ilysian Grove or Prismatic Omen so you can get a bigger payoff with Valakut, the Molten Pinnacle. To make space, I'd probably remove Raze and Cultivate. I haven't faced many decks where their game plan gets shut down from losing a land or two. And with a high land count combined with effects letting you play extra lands, Cultivate just seems unnecessary.

Try running Molten Disaster as a replacement for Starstorm. This will not just clear out creatures, but damage your opponent. And it's easy to give it split second so that your opponent can't respond.

I don't remember a time I whiffed on Summoning Trap. With 26 creatures currently in the deck, the odds of hitting at least one are in our favor. The instant-speed of this spell has been attractive as well. The overall return on the investment of six mana (with so many creatures in our deck that cost 6 CMC or more) is worthy of its deck slot. I prefer its inclusion.

The continued inclusion of Chord of Calling may have been an oversight on my part. Without the presence of Gaea's Cradle and a swarm of tokens, casting Chord of Calling to flash-in a now absent Craterhoof Behemoth seems misguided. It will be difficult to take advantage of its convoke mechanic. We want our creatures tapping for combat, not tapping in order to cast a spell. As my only copy of Worldly Tutor is spoken for, I will need to look in a different direction. Perhaps including Savage Ventmaw or Kozilek, Butcher of Truth?

Not a fan of Worldspine Wurm? Your assessment is correct: I'm never casting this for . HOWEVER, with Sneak Attack, Summoning Trap, Quicksilver Amulet, Tooth and Nail and Selvala's Stampede I'll never have to. Worldspine Wurm's performance has been spectacular and I am unable to justifiably remove it from the deck list at this time. It has been too good.

Participating in an EDH/Commander game without seeing at least one Superfriends deck has become as rare as winter roses for me. Star of Extinction has been a great way to deal with planeswalkers. Destroying a solitary land is nothing ground-breaking. I am not a proponent of land destruction. However, Maze of Ith is way too popular and I never bore of destroying it and then wiping the board. There's a lot of tribal in my meta and sending 20 damage everywhere helps to keep the battlefield clear. I used to run Starstorm. The instant-speed potential of Starstorm is great. Holding up mana to cast it instead of casting spells during my turn is not great. Questing Beast is definitely a bad mamma jamma. Perhaps I can find room for Questing Beast by swapping it in for one of the aforementioned unfavorable cards...?

I plan to keep Worldspine Wurm, Summoning Trap and Star of Extinction in the current deck list. They are quite helpful and have proven their usefulness historically in my meta.

I will definitely play-test and game-play a swap of Rampaging Brontodon for Atarka, World Render. This should not be a difficult transition, as previously mentioned.

I can Tinker with an exchange of Mana Geyser for Heroic Intervention. Perhaps the added protection will prove to be more beneficial than the somewhat pricey ramp spell. We shall see.

I will remove Chord of Calling from the deck. As stated, I believe it was an oversight to leave it in the deck list. Perhaps Questing Beast can take its place. I like that idea.

Thanks for the evaluation!

Would also consider Starstorm and Magmaquake