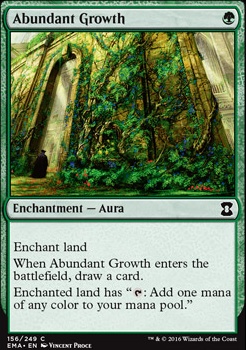 When Abundant Growth enters the battlefield, draw a card.

Enchanted land has ": Gain one mana of any colour.

Enchanted I'm Sure
by kjbrulport

That sounds like a good idea LeaPlath. Doing so might even make it worthwhile running enchantments like Abundant Growth, since we can abuse the ETB with Yorion. It also gives us another threat.

I just get a little concerned that our enchantresses density might get too low. But I will give it a try!

I'm not sure where else to post this, but I've been having issues loading certain cards when I playtest decks. I can see the cards when I hover over them in the decklist, but the images won't load specifically in the playtest mode. I managed to pinpoint a couple of these cards that weren't working at least for me:

If there's anything I can do such as provide more information or clarification, then I happily will!

Henryk Interestingly enough, it really isn't though. If you put in cards like Arcum's Astrolabe, Abundant Growth, and Wall of Blossoms, ect. the deck can really pop off and have Yorion, Sky Nomad net you like five cards. And the first two cards help fix your mana colors.

Many suggestions depend on how crazy you want to go with your mana base but assuming you are building in Jund colors, here I go...

Slippery Bogle or Gladecover Scout because they are protected and won't be as easily shut down.

Setessan Champion is the best card draw if you go enchantment heavy.

Also, I would suggest maybe adding some ramp cards because on turn 2 you will only be able to play two 1 cmc cards and on turn four you would likely only play a 1 cmc card and a 3 cmc card. Abundant Growth is good mana fixing and Arboreal Grazer is solid ramp.

That said, odd spells with X in the cmc are great because you can spend even amounts of mana on them i.e. Mistcutter Hydra, Hungering Hydra...

If you feel up to cutting red and putting in white, there are better synergies around enchantments in white.