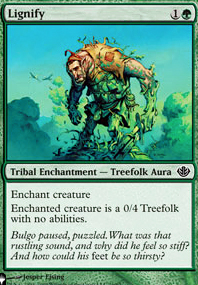 Enchanted creature loses all abilities and is a Treefolk with base power and toughness 0/4.

Lignify occurrence in decks from the last year

precociousapprentice: Thank you very much for the suggestion! I already added it to the Moxfield version of the deck (still awaiting on T/O to make it available).

It's going to be replacing Prowling Serpopard as you would expect.

12_dwarfs: Thank you so much for the comment and the upvote<3

SynergyBuild: I always thought that explaining the Lignify + Genesis Hydra trick once at that point, given how fleshed out every other loop is that people would figure that one out. But I'll include it for the sake of posterity :) (that super corner case actually happened twice; very satisfying wins)

Also, expect an update very soon guys! I was thinking some time next week. However, in my last update I mentioned a couple changes I was struggling with and it all came down to these cards being NECESSARY to the deck:

I have no idea as to what to remove for them. So help will be greatly appreciated.

enpc on Sliver and Arrest.