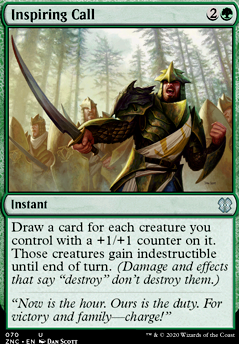 Draw a card for each creature you control with a +1/+1 counter on it. Those creatures gain indestructible until end of turn. (Damage and effects that say "destroy" don't destroy them.)

Chulane is an insanely strong commander, and there are certainly ways to build this deck to be more competitive even on a budget. That being said it seems to me you would like a fun and casual +1/+1 themed deck that tries to win with Simic Ascendancy. Personally I think that sounds like a lot of fun and you should definitely build around it.

The first place I would start with the deck is using Tomer's suggestions from MTGGoldfish for building Commander decks. The bullet points are copied from one of his articles. Tomer explains these bullet points to be more like guidelines rather than strict rules you have to follow. Then the rest of the deck is filled with whatever you want to add.

So maybe more what you may have been looking for in your original question is what cards to add? Cards like Whitemane Lion, Shrieking Drake, Beast Whisperer, Primordial Sage, and cheap mana dork creatures work well with what Chulane wants to do. But as far as Simic Ascendancy and +1/+1 counters, some cards I'd consider are Managorger Hydra, Loyal Guardian, Forgotten Ancient, Herald of Secret Streams, Rishkar, Peema Renegade, Inspiring Call.

https://edhrec.com/themes/p1-p1-counters is also a good resource. For the deck you're building I'd look at other commander decks that care about +1/+1 counters and proliferate like Ezuri, Claw of Progress and Ghave, Guru of Spores

I think Simic Ascendancy with Chulane is a really cool idea. Have fun deckbuilding!

The once a turn clause is definitely a drawback for sure, but I the way I figured it is if you have enough consistent card draw happening every turn then you're still getting to use the ability and you're finding other cards that will trigger it. More card draw never hurts, especially when your commander's activated ability can be a wincon depending on how many cards you have in hand. That reminds me, Library of Leng and Reliquary Tower both serve as pretty good budget options for holding onto all of the cards you'll be drawing, with Thought Vessel being a good but less budget option.

As far as drawing on everyone else's turns, the previously mentioned Runic Armasaur is a really nice choice. Some decent green instant draw you might like are Aggressive Urge, Benefactor's Draught, Bind, Feral Instinct, Inspiring Call, Lace with Moonglove, Lammastide Weave (lol), Momentous Fall (lots of tokens makes the sacrifice no big deal, especially if you get some big ones out there), Provoke, Skyshroud Blessing, Viridescent Wisps, and Vivify could be considered. Also the previously mentioned Verdant Rebirth. I'd say replacing the more situational cards that you'd usually be cycling anyway with cards that net you draw and share the same cost as the cycle should serve as replacements. For example Stinging Shot and Thornado are probably better off being replaced by some of the 2 cmc cards I just listed like Aggressive Urge, purely because in that case you're getting an effect and a card instead of just paying 2 to draw a card.

Gnarlback Rhino and Veil of Summer also have the potential to net you a card on another player's turn, with Veil being a good card all around and giving you some much needed stack interaction to get around enemy counters.

Liliana, the Last Hope if it's within your budget

Thanks for the suggestions mobizque! I definitely think you're right about swapping Colossal Majesty for Inspiring Call. Stonecoil Serpent is a bit above my usual budget for a card but I'll give it a few tries online and see what I think of it!