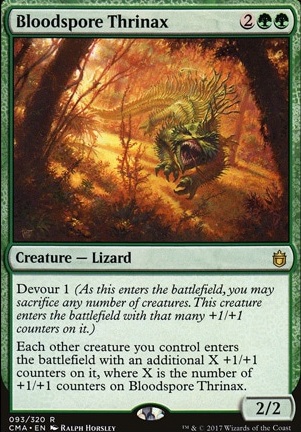 The Lady Toth Infest Too Much
by chrishenk

Fury of the Swarm
by MysticMud

multimedia Hi, thanks for your answer and thanks for your help with lands, but I have few questions First, why do u considering to cut Brass's Bounty , I think its fit this deck nicely, it can be a good mana for next turns and/or End game card combined with Revel in Riches , and i really like Butcher of Malakir so i don't think to cut this card, because it's like creature version of Dictate of Erebos Second, thanks for showing that Temur Sabertooth combo :) Third, Half of these cards from Korvold bravler deck, so I considering to change some of them with other cards and ofc lands :D. So I thinking to add - Bolas's Citadel I think it's really fit Korvold - Death Cloud for wiping board - Mazirek, Kraul Death Priest I just found that card and I really like that card, you can make your all token creatures to real deal and you get double counters on Korvold - Sylvan Safekeeper I think this card is a great way to keep Korvold alive - Bloodspore Thrinax I'am not sure for this, but it can be nice played with Mazirek, Kraul Death Priest to create a massive token army And what do you think about these cards : Mitotic Slime , God-Eternal Bontu , Open the Graves

Thanks again for your help! Sorry for bad English (not my native language)

The Great Henge is great for this deck. On its own since it draws you lots of cards and ramps you. But with a sac outlet and a persist creature it can go infinite, draw your deck, and find your win con the same turn.

Yawgmoth, Thran Physician is another strong card draw for a swarm deck. It can ping down opponents creatures and draw you cards. Its strictly better than Deathspore Thallid .

Ranger-Captain of Eos is amazing since it can find a combo creature and protect the combos which are easy to interact with. Walking Ballista , Young Wolf , Viscera Seer .

Also the deck seems removal light. Caustic Caterpillar is a good include since its a creature that can be recurred, triggered at instant speed, and found with your creature tutors in a pinch. Cavalier of Night is another strong card for removal on a stick and then gets you a utility creature back when it dies.

Out of the card's I'd cut: Bloodspore Thrinax and Ivy Lane Denizen are easy cuts as Henge is better than both and you already have many better counter enablers. Cryptolith Rite is too slow due to summoning sickness and it usually doesn't work with a combo turn. Deathspore Thallid as Yawg is better. Altar of Dementia is just a dead draw unless you are comboing off. Where your other outlets at least give you value.