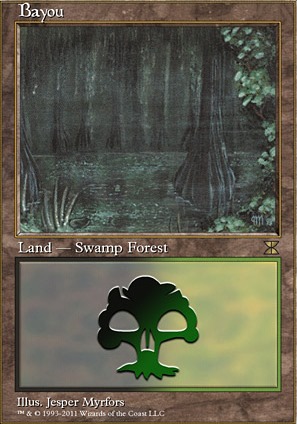 Plunder the Grave CEDH
by Beranabus01

AscendedLandfalls, thanks for the comment and suggestion. I haven't thought about running Dryad of the Ilysian Grove because outside of color-fixing and a psuedo Wayward Swordtooth effect for it doesn't offer the deck much. Worse yet, it's a very unsafe form of color-fixing as it is on a creature body that can easily be removed by a whole host of different targeted and non-targeted spells. I'll argue that it suffers from something similar to the "glass cannon" trope where it's super strong in some aspects - but super vulnerable at the same time.

Rampant Growth is good ramp in a certain context. I don't run that many basic land cards in this deck (only 3) so it's not really worthwhile to include. Farseek is probably more worthwhile as it can find typed lands, but paying for a tapped land doesn't seem as appealing as a mana rock for the same cost. You say Skyshroud Claim is not efficient? For I can tutor for two lands that come into play untapped and can fetch any forest typed land. That means I can fix my manabase by fetching any two of the following - Tropical Island, Bayou, or Savannah (or their shockland equivalent). If you think this spell is not efficient, then please tell me what i'm missing because I think it's nothing short of amazing for a multi-color deck.

Kaioken88 If you want to add in more competitive cards Here is a list: Vorinclex, Voice of Hunger, Yosei, the Morning Star, Acidic Slime, Liliana of the Veil, Reveillark, Survival of the Fittest, Jarad, Golgari Lich Lord, Phyrexian Altar, Ashnod's Altar, Grave Titan, Tooth and Nail, Savannah, Scrubland, and Bayou. But in all honesty, its how you play the deck and if you want to combo off or not that will determine if you are competitive or not

After some more playtesting I've decided that back to basics is to good and has to be played.