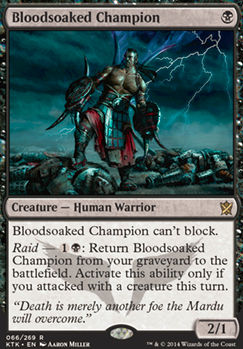 Raid â : Return Bloodsoaked Champion from your graveyard to the battlefield. Activate this ability only if you attacked with a creature this turn.

Bloodsoaked Champion occurrence in decks from the last year

The Tiny Partisan
by Tarzunga

Mana Bloom can only make 1 mana each turn.

Baffling End only hitting 3 or less comes up occasionally, but not very often. Most of the things we're wanting to hit with it are things in the aggro decks like Knight , Pack Rat , Scrapheap Scrounger , Bloodsoaked Champion out of mono B, anything apart from Glorybringer from mono R, also hits most things from that mono G stompy deck that's been going around. The restriction has been awkward at times, but I also run Cast Out and Prison Realm for bigger stuff, so I often have other options, especially with Idyllic Tutor and Calix, Destiny's Hand to find them when I need them.

I'd personally cut the Satyr Enchanter s altogether, I think that 6-8 card draw dudes is enough tbh, often later in the game, I stop playing more in fear of decking haha.

I've found having the full 4 Sphere of Safety in the 75 has been great. 2/3 in the main depending on if you go down the Idyllic Tutor route to find them more consistently is where I've landed after some testing. It's not the kind of card you want to draw 3 of in any game, and it's not particularly stellar in the control matchup either. Saying that, I'd definitely finish the set in the sideboard for creature decks, because a lot of the time, it's just lights out when it hits, or at least buys a lot of time to get set up more and stabilise.

Here's the link to the discord server (set to never expire so if anyone else comes along and wants to join, they can):

Every card that gets banned is just âdoing what it was designed to do,â but that doesnât change the fact they are incredibly unhealthy for a format. Giving Bloodsoaked Champion haste and allowing it to loot, created a very unhealthy format that no other deck could compete with, without playing specific silver bullet cards. This not only inhibits deck design, but also inhibit a diverse meta game.

capriom85 smugglers copter was certainly NOT fine. It was awful. Playing it on turn 2 gave every single one of your creatures haste, while also turning it into a Merfolk Looter . Thatâs incredibly powerful. The black aggro decks could keep basically any hand with 4 lands, copter, and a creature, and copter will not only find them more gas, it gives their crappy Bloodsoaked Champion flying AND haste AND deals an extra damage.

You really donât see how this was an issue? Because it was.

I do think Drown in the Loch is just better if you're playing it for the first two modes, especially as graveyard hate doesn't seem to be as prevalent as in Modern. Many decks that would want the third ability already play green and Commune with the Gods over it.

It could possibly work in a counter/removal heavy Grixis deck as Drown in the Loch 5-8 or (more likely imo) as a flexible card in a UB midrange deck that values the graveyard for Prized Amalgam , Scrapheap Scrounger , Bloodsoaked Champion , Arclight Phoenix and/or delve cards like Dig Through Time and Tasigur, the Golden Fang . In the first scenario, I don't see it making the cut as too many better cards exist in that slot, in the second I don't know if there is enough support for a deck that runs a graveyard strategy and protects it with counters/removal

Have you considered Bloodsoaked Champion ? Heâs a good aggressive mono-black creature, especially in sacrifice centric builds. Catfood combo could be good in a shell like this as well. Looks super cool man, love a good Gary deck, especially as a budget bomb!