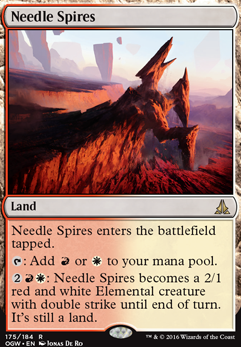 : Needle Spires becomes a 2/1 red and white Elemental creature with double strike until end of turn. It's still a land.

Needle Spires occurrence in decks from the last year

Queen of Politics
by hartbreaker88

I had a bit of a hunt for lands- any love for Vance's Blasting Cannons  Flip, Castle Embereth , Ramunap Ruins , Looming Spires , Needle Spires or Rogue's Passage . I'm not in on any but maybe ramunap??

I did a quick look through budget lands, and had the following observations:

Pain Lands, like Battlefield Forge and are probably the best lands for your criteria. I know several of them are usually around the $1.00 point, and you probably could pick up well-played copies of the more expensive options. These are great budget lands--they fix your mana when you need it but can be activated pain-free when you just need to pay a generic cost.

Check lands, like Rootbound Crag are not quite in your criteria (they tend to hover around the $3-6 range) currently, but they are about to rotate out of Standard, so will almost certainty go down a bit. These are a bit mediocre for a budget three-colour mana base, but they play very nicely with shock lands, so will still be useful to you once you have moved on to less budget-oriented builds.

The Onslaught Filter lands, like Sungrass Prairie , help filter you into the colours you need, but I would recommend against them. They're quite inexpensive, but they can't help you turn 1, and they're rather inflexible and will not always provide the mana you want.

The Battle Lands, like Canopy Vista , can be in the $2-3 mark. Personally, I am not a fan of them for 60-card constructed--they rely too much on playing a lot of basics, so they often can't enter untapped until turn 3-5.

Reveal lands, like Fortified Village , are disproportionately strong in two-colour budget builds that rely heavily on basic lands. However, with three colours, you just can't have the critical mass of basics to really make these lands shine.

Two of Naya's Manlands-- Stirring Wildwood and Needle Spires --are very inexpensive. They don't instantly fix your mana, but they can be used as a creature long-term which is nice.