Each player can't cast more than one spell each turn.Â

Eidolon of Rhetoric occurrence in decks from the last year

The End of Times
by EzraTerrestrial 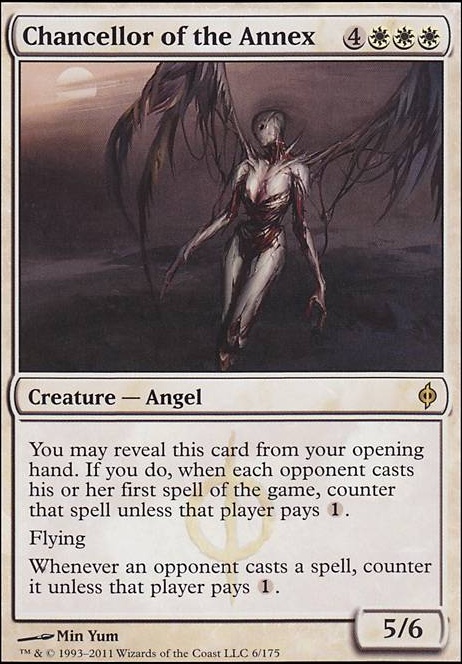 I'm Walking on Sunshine
by Apotheosis616

KayneMarco Kunoros isn't asymmetric like Anafenza is, nor does it stop Flash Hulk, which is precisely why someone would want to run Anafenza as a more niche anti-meta commander. More often than not you'd want to land Anafenza out on turn 2, and Kunoros is just a worse alternate redundant piece that affects you as well.

Kambal is fine for incidental lifegain, and I think it is a strong barrier for storm players to have to work through, but we have better options to consider in Eidolon of Rhetoric, Thalia, Guardian of Thraben, and Ethersworn Canonist for that matchup.

Speaking of which, I've been piloting a nearly identical list for a few months now. I've since cut Ethersworn Canonist in favor of Deafening Silence, mainly because Canonist wasn't stopping the Elsha player from comboing off in my meta, and Deafening Silence specifies noncreature, so the bulk of our deck can still play around it. It's definitely worth considering in my opinion.

Thalia, Heretic Cathar, Kataki, War's Wage, Spirit of the Labyrinth, Eidolon of Rhetoric, Rule of Law, Hokori, Dust Drinker, Painful Quandary, Oppression, Leonin Arbiter - and life effects - can really help you with D&T. Having played an Alesha version of hatebears. Its sort of stax like, mostly running a low powered creature count to keep the effects nice and stacked.

Luminarch Ascension can be a decent "win con", as if you opponents are unable to oppose you, you can just bash the girls in non-stop!

Eidolon of Rhetoric is a great sideboard piece against Phenoix and storm.

I mean, I'd definitely include Sram, Senior Edificer. Argothian Enchantress also seems really strong. You might want to consider some legacy enchantress cards like Elephant Grass or Carpet of Flowers, although their power will depend pretty heavily on your meta.

I really like that you're running Utopia Sprawl and Wild Growth already. You should run Arbor Elf with them... he makes more mana when lands are enchanted. In that vein, you may also have a lot of luck with Elvish Mystic, Llanowar Elves, Avacyn's Pilgrim and/or (if you're rich) Noble Hierarch. I've found a lot of players misjudge T1 mana-dorks and never play them, and they're almost always wrong not to.

You may like running cards like Rest in Peace, Eidolon of Rhetoric, Rule of Law or Deafening Silence. As a rule, these are build-arounds but in the right meta they can be very powerful.

You may also like running Green Sun's Zenith, especially if you want to run Dryad Arbor.

Zur, Lord of the Stars

Cool List for sure, I've got a Similar Estrid deck and I really enjoy the Enchantment base. Right off the back I would say add in Ethereal Armor for power, Auramancer for recursion, Solemnity if you wanna go towards stax, Ghostly Prison or Propagandafor protection, Swords to Plowshares for removal, Idyllic Tutor good tutor that was just reprinted, Eidolon of Rhetoric more stax, Mesa Enchantress life gain. New Heliod, Sun-Crowned and old Thassa, God of the Sea are both bomb enchantments that you can search for with Zur. Hope I was able to give you some reasonable additions. +1