+2: Discard a card, then draw a card. If a land card is discarded this way, draw an additional card.

-3: Return up to 2 target land cards from your graveyard to the battlefield under your control.

Lord Windgrace can be your commander. 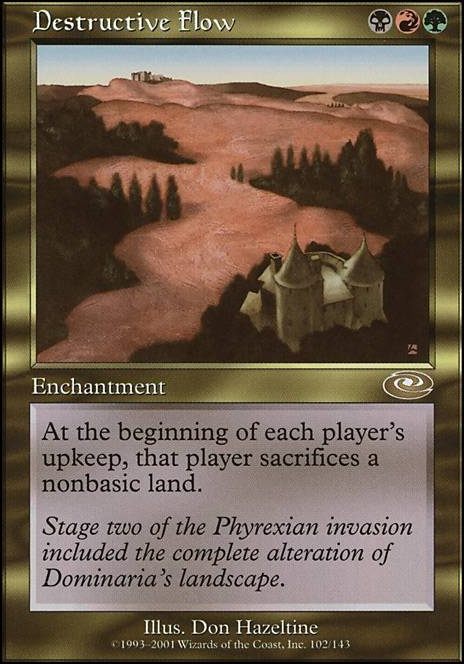 Actually, no. Both Prismatic Omen and Dryad of the Ilysian Grove both take care of that issue. These in combination with Ashaya, Soul of the Wild will cause triggers from creatures ETB as theyâll be land creature and recognized as all land types. Ancient Greenwarden gives double triggers without dropping Vesuva using Scapeshift or similar cards.

The real issue Iâm finding is that whit doesnât offer this deck design much. Iâm actually leaning towards Lord Windgrace

who would offer better tutoring effects and draw.

Iâm actually at a lose atm. I tend to build each deck with a different strategy and try really hard not to reuse ideas....except for Bolas's Citadel synergy and combo...Iâll admit I have that in three decks atm. I love it to much as it works to well for those decks.

With this deck I want the option of a commander damage kill, but I also want to feed into going wide with animated lands and/or tokens. A sub theme I want is a lands finishing kill using Valakut, the Molten Pinnacle. This build list will likely change a lot before I am happy. Iâm also considering Omnath, Locus of Rage or Lord Windgrace

as my official lands matter commander

RNR_Gaming on Jund vs Gruul

is the poster child for mld. It easily breaks parity. Allows easy recursion and the ult is super sweet. Black also provides the best tutors and some of the best card engines in the game

Some things to do with a Lord Windgrace

Everybody Dies! : Massacre Wurm + Natural Affinity. Have the affinity in play, cast the Wurm when all of your opponents have a lot of land out. All of your opponents will lose 2 life for every land you just killed. If any of your opponents are still alive. Use your crucible and stuff like World Shaper or even Groundskeeperto get your lands back. Additionally, you can add Massacre Girl in place of the wurm but it will only kill their lands if a 1/1 creature is in play and wont do damage to the players. You can also replace Natural Affinity with anything else that makes all lands creatures like Living Plane or Nature's Revolt.

I'm A Fat Bastard! : Before you cast your Craterhoof Behemoth put any of those lands into creatures cards like Natural Affinity, Living Plane or Nature's Revolt into play first! Then when you cast the behemoth, it, and all of your creatures and land creatures will become HUGE!

Kill It With Fire! : Using Scapeshift or World Shaper or Splendid Reclamation while you have Valakut, the Molten Pinnacle in play or in graveyard and Prismatic Omen in play. X number of lands enter play, valakut thinks they are all mountains and you get to spray damage everywhere. You can also put Field of the Dead in the deck and take advantage of that for lots of zombies when you do this event. If you add Ob Nixilis, the Fallen to the mix you can drain your opponents all out while this is going on as well.

Hocus Locus! : With Omnath, Locus of Rage in play and Goblin Bombardment you do something to trigger his landfall a little or a lot. You get a lot of 5/5 elementals who are 4 pts of ticking time bomb damage! At any time, you can sack any elemental to the enchantment. This does 1 pt to any target, then the Omnath trigger does another 3 pts! Just putting lands into play the normal way makes this good. But then when you have a bunch of land in the yard, using Splendid Reclamation is insane with this.

That is all i got for now! Good luck with the deck!

Jund fits into that type wheel house I will list a few of the well know commanders Old school Prossh, Skyraider of Kher Most are using Korvold, Fae-Cursed King now because he is such a big value engine.

was the one before Korvold showed up

Tatyova can be annoying, but really lands decks in general are annoying to play against, and there isn't any particular lands commander that I dislike the most. Tatyova, Benthic Druid, Lord Windgrace

, and Omnath, Locus of Rage are all about the same to me

Eftsoons the war against Yawgmoth, multiple rifts were bestrewed about the plane of Dominaria (yclept the Time Spiral Crisis), thusly needing to be sealed by Planeswalkers. Thence they ceded their sparks. Freyalise did so, as with Lord Windgrace

, along withal a few others, but this rectified the marred lands. Once Jeska shut the very last one, the mana began flowing freely through the plane, and the multiverse, once more, arighting the power planeswalkers held.

Planeswalkers now still age, but some have reasons. Teferi, Mage of Zhalfir cannot due to being in the gyves of a time rift for several decades. As in the aforesaid, Liliana due to a stygian contract.

That's all I have.