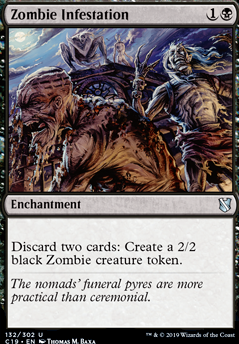 Zombie Infestation occurrence in decks from the last year

Ayara gets first blood
by Harbinger1993

The Nightman Cometh
by SirLandus

I see Ayula's Influence, I figure Zombie Infestation would be a good backup

I see what you are going for, but can I ask why not use Buried Alive or Entomb? A turn 1 Entomb + Griselbrand + Exhume will finish the game really fast... Also, by "tutoring", you can use less creatures in your deck, and open slots for cards like Duress, Collective Brutality, Sign in Blood, Lotus Petal... Disruption is always good, extra draw will fuel your Zombie Infestation and Lotus/Rituals let you chain cards off a Griselbrand activation by giving extra mana.

Against grave hate, I recommend Pithing Needle, Phyrexian Revoker... cards that shut down Tormod's Crypt, Deathrite Shaman and similar. Against counters, Boseiju, Who Shelters All is really good, also Pyroblast.

For the creature-package, I have a few suggestions... Anger gives everyone haste, Sheoldred, Whispering One is a Reya on steroids, and Sire Of Insanity.

Two cards I will always recommend for madness decks are Shadow of the Grave and Skirge Familiar . They are among the strongest discard theme cards out there and will definitely improve the deck.

If you need more removal or better control against decks with creatures, I'd suggest Archfiend of Ifnir , the card is amazing and if you don't need it, just draw a card off it.

In general, I'd add more discard outlets, yeah I get the vampire tribal theme which totally fits and stuff, but discard like Chainer, Nightmare Adept and Zombie Infestation are amazing. If you want a more vampire themed stuff, try Olivia's Dragoon or Insolent Neonate .

Finally, and this is with every emotion I can muster, HOW DARE YOU NOT RUN Bone Miser ! That card was built for this archetype and you ignored it. To quote Norman Osborn from the first spiderman movie: "I offered you kindness and you spat in my face." That's you, you're the face spitter. Please for the love of god put that card in.

Yes. You're right about the Birthing Pod into Razaketh, the Foulblooded combo. I actually had it in the deck for some time, but, as weird as it sounds, I think I took it out because it was too easy to win with. But I should at least add it to the Maybeboard, just so that people know about it. Maybe I'll put it back into the main list sometime.

Now the Desecrated Tomb idea. It's brilliant! Absolutely brilliant. I never realized that it could replace the Zombie Infestation in the Greater Good combo. I just need an extra discard outlet on the field, and a creature to exile every time, but that shouldn't be hard. I don't mind you double posting, especially if it's for something as good as this!

Snivy__, Treasure Hunt does work for Conflagrate & Zombie Infestation . I'm using Treasure hunt to get cards in my hand, yes I'm not drawing them, but I still get cards in my hand which is what matters. Then I can discard thoso cards to use Conflagrate & Zombie Infestation very effectively. I'm still looking to replace Psychosis Crawler though, as making 1 big creature isn't really effective.