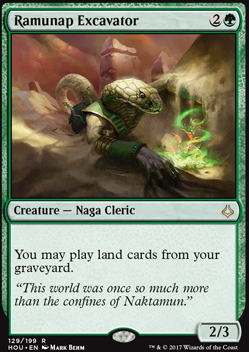 Ramunap Excavator occurrence in decks from the last year

You could expand on the interaction of being able to play more lands a turn.

Crucible/Excavator have good interaction with Reformation and Loam is the enabler for these cards. Reformation and Horn can be consistent sources of repeatable draw with only lands.

Aggravated Assault is a combo with Savage Ventmaw for infinite combats. Nature's Lore is upgrade for a land ramp spell because you have Taiga, Stomping and Glade.

I am a strong believer in theme, and I approve your 100% creature build.

However I see you are tempted to go the way of adding a few ramp spells, so I tought you may want to consider Skyshroud Claim . In my opinion however, the two cards you definitely need to look at if you are going to move away from creatures are Lurking Predators (already suggested in this thread) and Rhythm of the Wild .

Suggestion for your mana base: If you don't have budget for the big fetch, you can still add Fabled Passage , Bant Panorama , Jund Panorama or Naya Panorama . Then you can play them from the graveyard using Ramunap Excavator and the upcoming Dryad of Ilysian Grove. You could also use a Budoka Gardener .

DrukenReaps made some awesome creature suggestions in this thread that I agree with and you have not added, I recommand taking a second look.

Here's one that requires some oldschool cards.

This is infinite life and infinite mana. In short... Fastbond was broken

I must admit that I really like the plays that I got off with Awakening Zone in this deck. The Tokens allow some sweet abuse of Meren's passive!

I think I will replace the Wood Elves with the Ramunap Excavator and the Farhaven Elf with the Springbloom Druid - but I will definitely test it out, because I had some nice moments with the two elf-cards in play.

I think i would switch out Farhaven Elf , Wood Elves or Awakening Zone to make room for Ramunap Excavator . I'm leaning more towards Awakening Zone. I've tried to run this card in my Prossh deck and i feel like it never paid off. I think I had maybe one game where it helped me get my commander out early but other than that I think its too slow. Maybe you've had better experiences with it than me. Honestly, your deck looks solid and you probably don't need to put in the excavator if it's gonna mess with what you already have going.

If you do end up putting in the excavator, Springbloom Druid is another card that works well with it. I would trade the Wood Elves or Farhaven Elf for it. Good Luck!!