Mental Misstep occurrence in decks from the last year 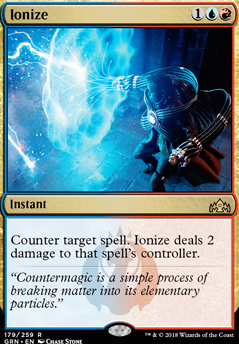 Rafiq of the Many, full write up
by Annnd-I-Lost-Again

For cEDH level, I'd recommend putting in:

Drown in the Loch for good removal/protection, as well as Reality Shift for extra removal.

Dispel , Delay , Flusterstorm , Spell Pierce , and Mental Misstep are all good protection/mitigation spells at cEDH tables, as well as Force of Will

Vampiric Tutor for your instant generic tutor and Imperial Seal if you can afford it. Lim-Dul's Vault is also a good tutor/pile maker and Merchant Scroll can search Dramatic Reversal and any counterspell/blue removal spell.

I'd recommend removing Lightning Greaves and Swiftfoot Boots as these are only relevant when you have a creature on board and are only sorcery speed protection for said creature.

With the banning of Paradox Engine , Despark does not have many relevant targets. In fact, I'd say it's only niche to reanimator targets or any other big creatures that get cheated out, which is VERY dependent on your meta.

Arcane Denial is something I'd only find not bad if it's literally used to protect your win con on the turn that you're going to win; otherwise, you just netted your opponent over you. This one's up to you but I'd rather not play it.

Fundement - Blood Pet is a dead card outside the hulk pile and opens the pile up to further interaction such as Mental Misstep and Flusterstorm . Furthermore, the Spellseeker pile is also meant as a way to Flash Hulk through Cursed Totem which stops Blood Pet .

You're gunna wanna make room for Mental Misstep , Mana Drain and Force of Will . Free counter magic and proactive counter magic go a long way at keeping you alive to be able to do your strategy.

I mean, I'm surprised no one mentioned any cantrips yet... Ponder and Preordain are pretty easily two of the best cards in EDH (there's a reason they're banned in Modern), so I think you should stick them in there. multimedia's suggestion of a Flash line is a good plan, and adding the cantrips can help you find it (or whatever combo). Since you're not running fetchlands, I don't think Brainstorm is a good idea. If you do run things like Polluted Delta , it gets REALLY good.

I would also like to point out that, being as creature heavy as you are, you may have trouble with boardwipes. I think you should consider backup cards, like Living Death or Heroic Intervention , since they'll let you survive if you get hit with a Toxic Deluge or Supreme Verdict .

I like that you're running Deathrite Shaman and Birds of Paradise , but you should run some other dorks as well. Arbor Elf is good, especially with duals like your Overgrown Tomb . I'm also a big fan of Elves of Deep Shadow or the classical-era Fyndhorn Elves / Llanowar Elves / Elvish Mystic . Running dorks gets your general down that much faster, meaning your deck overall becomes exponentially more powerful.

If you run the dorks, you can cut cards like Chromatic Lantern in order to make Collector Ouphe viable. Collector Ouphe is a brutal card, especially since you can find it off of your Green Sun's Zenith .

You're running a lot of basics for a tri-color deck without Back to Basics or Blood Moon . There're some cards you may want to look into, like Mana Confluence , City of Brass , Reflecting Pool ... These'll smooth out your mana nicely.

Efficient counterspells can help protect your general and slow down your opponents. I suggest considering some of the following: Spell Snare , Spell Pierce , Delay , Dispel , Swan Song , Veil of Summer , Narset's Reversal or even Mental Misstep , depending upon your meta.

Back. Though I still world like a Mono= replacement for Delay that's not Counterspell , Force of Will , Pact of Negation , Mana Drain , Mental Misstep , Flusterstorm , etc, Either 2-3CMC, or 1-2CMC if you can, is an Instant, & is inexpensive.

I hope somebody can suggest something w/ all these requirements please. Thanks in advance. :D

@bushido_man96: Yeah... It's Ironic I don't remember who suggested Guardian Project in the first place. Whoever did for this particular deck may as well be enshamed; either someone else here entirely, or EDHREC led me too far astray for unintentional logic that's all on me.

As for Delay : It was, strange. Every decklist I had that ran almost always had Mana Drain ; which is no bargain anymore AFAIK. Somebody noticed this (Dunno who in regards of either.), & commented as to whether or not I had THAT many Mana Drains. Now it's confirmed these are just lists for now, I think I have to do something about my Delayed Crisis . Basically, the rules in this case are as follows:

1: This is exclusively Mono-. Any Multicolor or anything Off Color is strictly forbidden.

2: I'm not putting in Force of Will , Pact of Negation , Mana Drain , Mental Misstep , Flusterstorm , etc. I'll save the cEDH Crap for some kind of cEDH Boros Deck.

3: OI! To respond is to do it INSTANTLY; Instants only.

4: Must be Inexpensive, but good. I only excluded both Flusterstorm & Mental Misstep as they're situational. So none of those either, please.

6: Counterspells that also help your opponents are exempted as well... Arcane Denial â¦

7: If you want, I actually advise Counterspells that can also add some additional pain to the opponent in question.

OK, this is too much, but you want me to replace Delay . It's temporary, but, yeah... Now I feel it SUCKS. Do you have any ideas by any chance; granted these 7 Tables can be used as anything for help? I'll talk later...