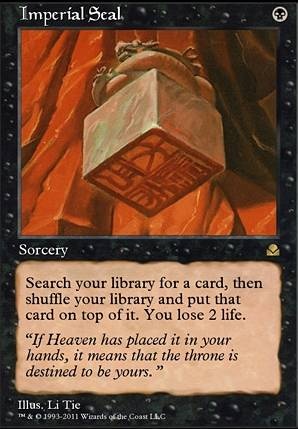 Imperial Seal occurrence in decks from the last year

The End of all Things
by Shadow_fax

Imperial Seal is in fact a worse version of Vampiric Tutor, the price difference only comes from the former being printed in PK3 which had a very limited release. I want to see a reprint soon!

I'm glad I've inspired you, I actually just took a look at your list and I've gotta say, I'm a big fan! This is my first foray into the commander, and I'm just looking for feedback/using this website to deckbuild before I purchase anything, so pretty much everything is up for cutting lol (except Read the Bones... I love that card :P)

Imperial Seal is just a worse Vampiric Tutor right? Its $650 for a worse version of a $100 card.

It is interesting seeing more creatures in you iteration of this commander. Most, including my own, are way more heavily leaning towards instants. I really love this commander, so I may look into doing a version closer to this with it being more creature based. Besides some excruciatingly expensive cards it looks cool, you've inspired me.

Now that the entire set has been revealed, the lack of reprints of Imperial Seal, Worldly Tutor, Akroma's Memorial, Vedalken Orrery, and Cabal Coffers are some very glaring exclusions, but I shall maintain hope for them being reprinted in Commander Legends, later, this year. On the other side, another reprint of Imperial Recruiter is always welcome, and I got my wish for Riku of Two Reflections being reprinted! He looks so awesome in the new card frame! Also, on that subject, the alternate artwork by Richard Kane Ferguson on Toxic Deluge is wonderful, as it is that old-school fantasy art that this game had in its early days, but has not seen in quite some time; the fact that WotC was able to get both Ferguson and Baxa to illustrate new artwork was quite impressive; if only the could have convinced Rebecca Guay to draw something new for them. Having said that, I noticed that Todd Lockwood, Ron Spencer, and Steve Argyle have not illustrated any new artwork for this game in some time; I hope that they have not lost interest in doing that. Also, I am rather sad that Riku did not have alternate artwork, but at least he was reprinted.

Overall, I am very pleased and impressed with this set; it did not contain every card that I desired, but I did not expect it to. Some players have been complaining about it, but I feel that the positive traits of this set outweigh its negative traits. The price of the sealed product is definitely a very major problem, but the only way to protest that is to not purchase it and instead purchase singles only. Hopefully, WotC shall realize that blatantly overpricing products is a poor business practice, and shall cease doing that in the future.

Profet93: I haven't gotten to test these changes yet, honestly. I swapped Ugins to use his ult as a wincon, rather than trying to use him primarily for removal. Plus, when I can keep the board clear he does great work.

Crypt Ghast has been in here since the beginning, yeah. He's good.

Bloodchief is back in because I couldn't resist the beautiful foil. I'm hoping I can use it as a way to offset life loss from Yawgmoth, and to keep certain infinite combos from working.

I actually might be cutting Imperial Seal so I can sell it, haha.

I haven't gotten to cast Black Market yet, and I've also been considering running Revel in Riches instead...

Iâm hoping tomorrow includes any of the following: Worldly Tutor, Vampiric Tutor, Imperial Seal or Force of Will. The rest of the sword cycle would also be nice, and fetches would break the set, but we can still wish.

Unlife on Beseech the Queen, Odd or ...

A fairly straightforward question, I'm working on a deck with Obosh, the Preypiercer and need a replacement tutor for Imperial Seal, which is a bit out of my price range.

Does Beseech the Queen have an Odd or Even converted mana cost?