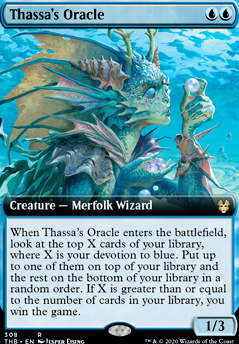 @TriusMalarky, Abrupt Decay, Assassin's Trophy, Fatal Push, Path to Exile, and Flusterstorm all have been printed at rare. I'm okay with those xD

TriusMalarky you can find removal in the rare slot. theres tons of it. like Abrupt Decay, Assassin's Trophy, and Mythos of Nethroi. i definitely think the format has problems, but i don't think a lack of removal is one of them.

Currently planning on testing an Ashaya/Yisan/Untapper package with the following cards:

While high cmc, Ashaya immediately protects our field from Cyclonic Rift, Abrupt Decay, Grasp of Fate, etc., gives us immediate access to large swaths of mana, a massive beat stick, and a combo win line that might be a better alternative to one of this deck's or an additional backup.

The combo is simple. Big mana dork like Bloom Tender, Faeburrow Elder, Priest of Titania, then Quirion Ranger or Scryb Ranger, bounce itself to untap the big dork, tap it to recast the untapper and float more mana, rinse and repeat for infinite mana. Using Thrasios, Triton Hero

, and the deck is played and you've won in a million different ways!

These cards seem playable individually and together they seem busted. The untapped specifically also combine nicely with Yisan, the Wanderer Bard, given some in-deck synergies lets us piece together an Ashaya combo or make a different combo.

Alright guys, this one is super spicy and WILD as hell to me, but I am considering Ashaya, Soul of the Wild swapping Thousand-Year Elixir. Here's why:

Thoughts guys, cause this is starting to look like a shoe-in. Posted again to kickstart the discussion since T/O went down and I didn't even see l13199l's response (which I agree with).

AND to note that Quirion Ranger can bounce/reset itself with Ashaya on the field. This in mind, I think I am going to remove Cloudstone Curio OR Umbral Mantle for Scryb Ranger. Thoughts?

Earthcraft + Ashaya, Soul of the Wild + Quirion Ranger go infinite on their own!

Alright guys, this one is super spicy and WILD as hell to me, but I am considering Ashaya, Soul of the Wild swapping Thousand-Year Elixir. Here's why:

Thoughts guys, cause this is starting to look like a shoe-in.