The Roil, The Damned Roil.
by Ungodlyfreak

Goato: Gifting Skulls all the way to Value Town

@Jackfrost23: Compared to U/R Storm with Gifts Ungiven, this is more of a "draw-go" hard control deck, rather than a combo deck. You're looking to grind your opponent down through raw card advantage and silver bullet answers over casting a big Grapeshot. Compared to Junk Gifts, the red over green means much stronger removal. Not only do you get Lightning Bolt, but also cards like Terminate and Kolaghan's Command. Sometimes, you can just burn people to death like U/W/R Control does by going Lightning Bolt -> Snapcaster Mage -> Lightning Bolt at your opponent's end step, then untap and swing with Snap and Celestial Colonnade.

What makes this specific build powerful is how difficult it is to remove its threats. Not only is Godo, Bandit Warlord strong on his lonesome by getting an equipment, Batterskull is hard to get rid of. But then along comes Trading Post and Academy Ruins to make Batterskull even more difficult to remove. This means you can safely trade your threats against other control decks. Your opponent is forced to counter your Batterskull after they bounce it back to your hand after it came out from Unburial Rites on Godo, only to have to still deal with it when you get it back via Crucible of Worlds -> Academy Ruins. Coupled with Lingering Souls and other threats, you have this massive value engine that means your opponent gets 29,301,246-for-1'd every time they want to deal with something.

Where this deck struggles that other Gifts may not is in the lack of countermagic and answers to aggro. Aggro can have problems dealing with the 12+ removal spells in the main deck and boardwipes out of the sideboard, but sometimes you just run out of removal faster than they run out of gas. No counterspells makes Tron and combo difficult matchups. This build is more about beating a control-heavy meta with red-based aggro, while CoCo variants, Humans, Fish, and so on are harder to deal with. 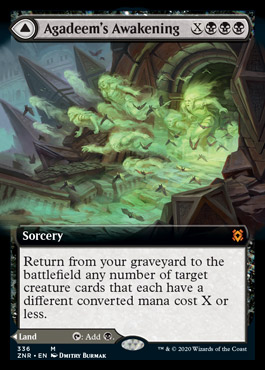 I would consider this pretty much an autoinclude just for value. Unsure of what to really cut to make room but it does provide both the opportunity for a landfall trigger and reanimate key value engine creatures. 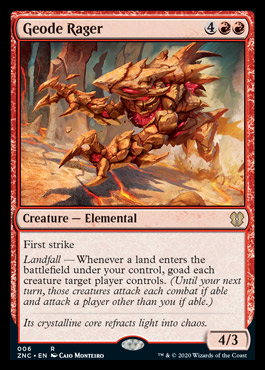 A way to use your landfall triggers to make yourself pretty much unable to be attacked by opponents. There are ways to get around this like dropping hasted creatures (as they weren't around when the goad ability resolved). That said you could keep an uncracked fetch open to do it at the begin combat step. Only issue is the rather steep mana cost of the creature along with being double red, which makes it technically the hardest to fix for with the current mana base.

Pretty much useless in 1v1 so just keep that in mind. 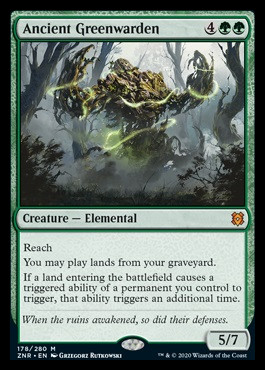 Honestly I don't think this card works that well in this deck because the number of landfall/land ETB creatures isn't actually that large (currently 5) however with something like Retreat to Hagra this can become quite painful for opponents. The added Crucible of Worlds effect does make this card tempting but the higher CMC and vulnerability to removal as a creature makes me hesitant to give this more than a passing consideration. You can look at some corner cases like double triggering Burgeoning, but if you have the spare mana to be able to cast this then you generally won't have that many land in hand I imagine to be able to take advantage of the trigger. Also note the complete cluster that something like a bounceland creates. It's good but it's not great.

I'm in love with this card. We can fetch Crucible of Worlds and Doubling Season/Parallel Lives effects in one creature card?! This card is gas. It literally gives Omnath token fuel to burn. Plus, it gives us redundancy effects.

Spicy card. Moraug is fun when have enough bodies (without summoning sickness) and landfall triggers to abuse Maraug's extra combat steps. This can be another wincon but honestly I've found Omnath's lightning/token effects and Craterhoof Behemoth's ETB efficient enough to win most games. I prefer to add redundancy effects like Terror of the Peaks and Ancient Greenwarden instead. If you want to spice up the deck by adding different wincons like Moraug or Triumph of the Hordes, by all means try it out.

I like Valakut card more than Nahiri's Lithoforming. Lands are a finite resource in the deck. Nahiri's Litho's draw effect is cool but its effect to destroy and replace lands seems more like a finisher move for me in order pump up Omnath's token production to trigger ETB burn effects or Omnath's lightning effect via sac outlet. Then again, Valakut is perceptible to removal so you'll lose your casting ability of exiled cards. Tough cookie.

I think there's a couple of cards that could be good that I'm not seeing mentioned yet. Vastwood Surge seems like a significant upgrade over Ranger's Path. Most of the time they will function the same but the upside on Vastwood Surge to pump your board when you need to is very good. Especially since you can play a land and then cast it kicked the turn after you play Omnath leaving you with 4 7/7s after what I think is a reasonable play pattern to expect. Many of the DFCs could definitely see some real play. In particular I like Valakut Awakening Â Flip as a way to dig deep. One of the big upside to these cards is that you can cast them as the spell side and then replay them later as lands from the graveyard via Crucible of Worlds effects. Note that they are not counted for Splendid Reclamation or Genesis Wave but cards that let you play lands from your graveyard or deck do let you play MDFCs as lands from those zones.

I would push back against the 'devil's advocate' comment as Ancient Greenwarden's body is really useful being a 5/7 with Reach. We have little to no way of dealing with flyers. It isn't much but it helps. The crucible effect is huge but we also in essence getting a 3rd Doubling Season effect most of the time. I know technically it isn't but it would act the same way. 6CMC for 5/7 Reach, Crucible of Worlds and Parallel Lives/Doubling Season seem like a good deal. Lotus Cobra becomes a powerhouse too with this in play.