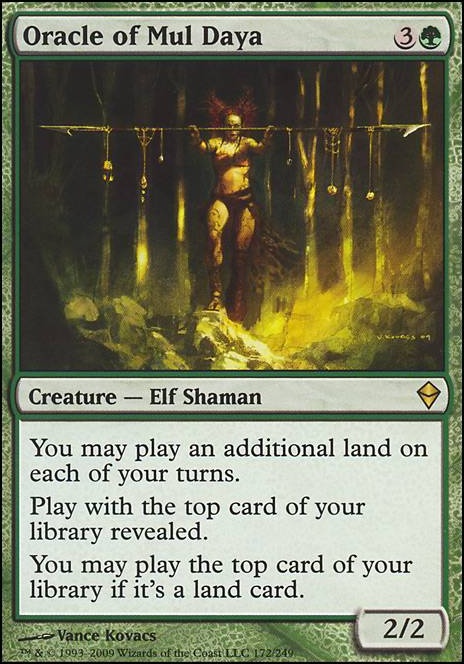 Oracle of Mul Daya occurrence in decks from the last year

Bounce It
by NeoGeo 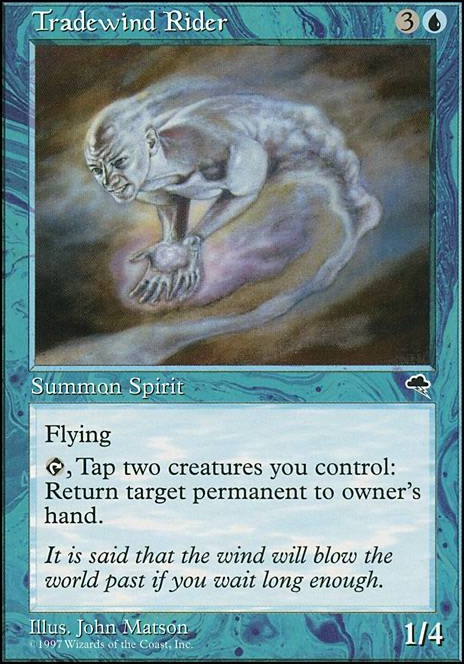 Kruphix God of the Sea?
by wildturtles

A weaker, uncommon Oracle of Mul Daya, which Is still powerful, in my opinion:

You may play the top card of your library if it's a Forest card.

I'd like another uncommon version of a busted card

Landfall - whenever a land enters the battlefield under your control, you may search your library for a swamp card, shuffle your library, and put the card on top of it.

Whenever ~ deals combat damage to a player, draw a card.

Combos heavily with Oracle of Mul Daya, and would totally be in a deck with The Gitrog Monster to some extent or other.

Make a common octopus with 5 CMC.

I would add Worldly Tutor instead of Once Upon a Time, since it can get any creature and costs less mana.

Gravity Well seems okay but have you thought about playing good old Hurricane? It's a great way to wipe out fliers and it also deals damage to players, which means you can use it to end games. You're usually ahead on life because you were the agressor anyways.

Wilderness Reclamation seems a bit narrow in your deck. I can see the combo with Yeva and Chord, but you're not guaranteed to get it going very frequently. I feel like this could serve as better ramp. Maybe Oracle of Mul Daya?

I'm not a fan of Scute Mob in this deck. By the time you can start growing it, you could just play a better creature and all the while it could just get sniped or sit there as a useless 1/1. I think you could use more ramp instead. In mono-Green, I like Gaea's Touch because it's never totally dead and can also get you to 6 mana on turn 3 by itself in an ideal scenario.

Eternal Witness is a Commander classic that deserves a spot in your deck. Regrowth is also a pretty useful card to have.

HI I like everything untill I saw your creatures and artifacts. I know this is casual. But there are a few cards here that are a bit of. And I think your build could do better with other cards. For example Dragonlair Spider isen't helping the strategy where a Oracle of Mul Daya really would help the strategy. If think if you focus more on the land bursting your deck will flow better with valakut.

But that depends if you wanna have your deck like that. Maybe you rather stomp with creatures instead. If so your deck should include Rampaging Baloths.

ThunderSpawn, I do no have any plans of making an budgetless version, simply because Iâd rather put time into decks Iâd actually buy and play, or upgrading decks that I already have. Some cards I would include in such a deck tho would be Craterhoof Behemoth, Oracle of Mul Daya, and Bramble Sovereign.

In addition to the Swordtooth: Azusa, Lost but Seeking, Exploration, Burgeoning, The Gitrog Monster, Oracle of Mul Daya and the new Dryad of the Ilysian Grove all can let you play extra lands that you may have in hand. Unfortunately all are on the more expensive side.

[Holy crap! I hadn't checked the prices on most of these in awhile and man have some of them spiked...!]

Thanks for the upvote and suggestions :)

Harrow - I do like but Dreamscape Artist lets me do it once per turn, with Seedborn Muse every turn.

Summer Bloom I was running but found it to only benefit me once, and itâs rare Iâd get 3 lands in hand without being able to dump then anyway so I chose to cut that for the likes of Llanowar Scout as I can once again do this much more and theyâre the same cmc.

Oracle of Mul Daya is on my list along with the likes of Scapeshift and Constant Mists but itâs just a bit too pricey all in one go haha.

Rites of Flourishing is tricky, Iâm not sure if I like the benefit it gives to the board.