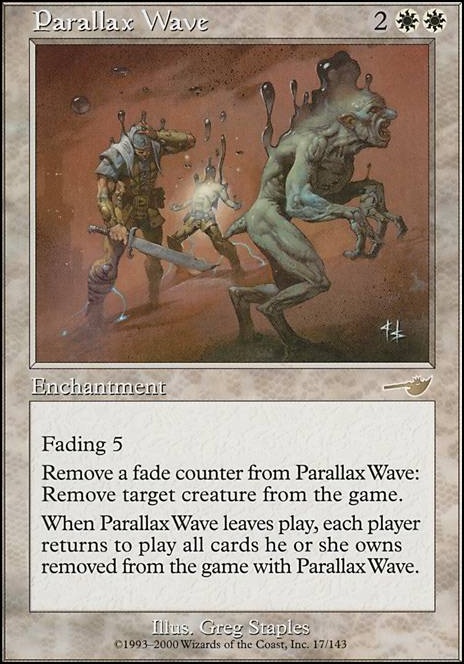 Fading 5 (This enchantment enters the battlefield with five fade counters on it. At the beginning of your upkeep, remove a fade counter from it. If you can't, sacrifice it.)

Parallax Wave occurrence in decks from the last year 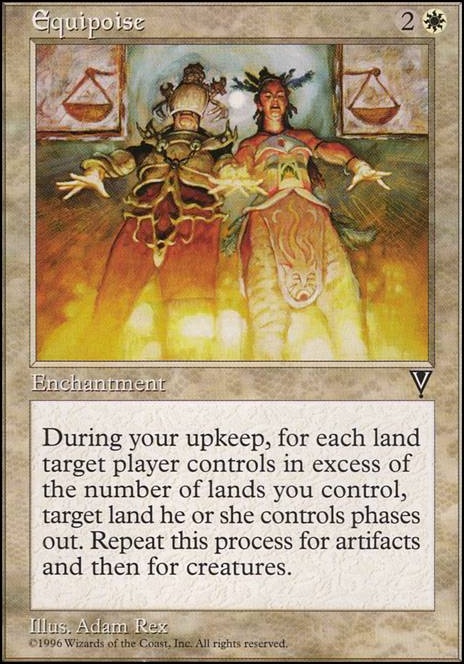 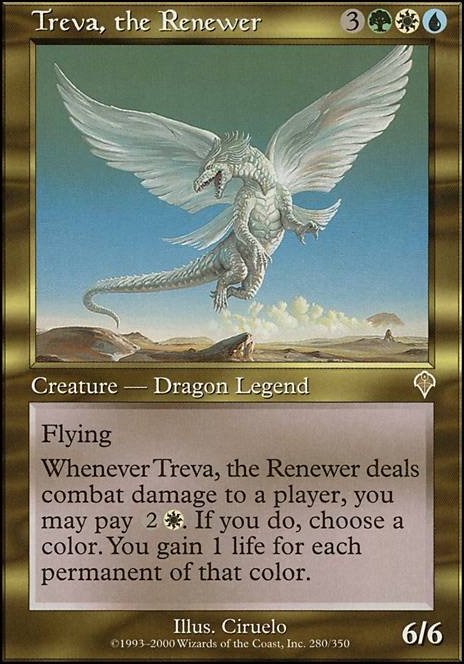 SynergyBuild on What was your favorite play ...

There was a time that I was at 13 life. I had 3 cards in hand, and made myself the target of the table previously, and could win on my following turn. A friend, who I will call Sara just got a Craterhoof Behemoth AND Triumph of the Hordes out, on their turn, with 8ish creatures out, easily able to kill the table. This was the turn before mine, and I had basically no political power. A Korvold deck had the turn after mine, and seemed to be gripping his hand with all of the cards held together.

I'll call the Korvold player James. James told Sara to not swing at him this turn, or else he'd have to deal with her. She was initially like idc, I might give you another turn, because they had teamed up a bit before, and were on good terms. Assumedly he was just asking for an extra turn, however I knew Constant Mists was a popular card in those decks. I had to judge whether to play with the idea of pretending I had an answer and bluffing, or to attempt to force his possibility of having mists.

I decided I was gonna get tricky. Now I stated I can't win, Sara had me pinned, and shook hands. Then I told James I can't win, but because he was going to get another turn, I might as well make sure he wins, and I tap some mana to cast Swords to Plowshares on Sara's Phyrexian Revoker, which had named Squandered Resources. Now I had what I wanted. Just a few turns prior James said that Revoker stopped him from winning, and I knew there was a chance of him having a chance at winning, but this was a wheel and a few turns since, so I assumed he at least needed his turn. Additionally he cast a Splendid Resources since then, so I assumed he used it up.

As this was pre-combat, I had to force Sara to attempt to kill James and have James also have a fog, but this was my only chance.

Sara - I think you need to die now James.

Sara - No we didn't I said I might spare you a turn. Now you gotta go.

James - Trust me if you swing I will stop you.

Me - Wait you can stop over 100 infect? You have like 8 toughness, how much removal do you have?

James - Screw it! Swing out, watch it.

And then, it happens, Constant Mists.

I got there, that swords to plowshares saved me from 100 trampling damage. I won the game next turn, with a fun little combo that involves Opalescence and Parallax Wave. It was a sweet game, and my favorite play to date.

What are your favorite plays? Any you made? Any deals? Any you've heard about or seen?

cool deck!
the cmc is high but any thoughts about Sepulchral Primordial or Diluvian Primordial?
i would consider Anguished Unmaking over Mortify for the versatility.
also kind of a niche card is Parallax Tide, you can temporarily take an opponent off of a color or reduce their mana.
along the same lines, with Parallax Wave you can exile your own creatures, and when it leaves the battlefield due to animatous ability, you get all the ETBs from your creatures.
also you could run Possessed Skaab over Mnemonic Wall, for the same CMC you get the added ability to return a creature card.

I assume you've purposely focused on Sagas and wouldn't work with the fading and verse counter permanents e.g.

Painter's Servant + Grindstone can always get there, Basalt Monolith + Rings of Brighthearth +Outlet for infinite mana can do it too.