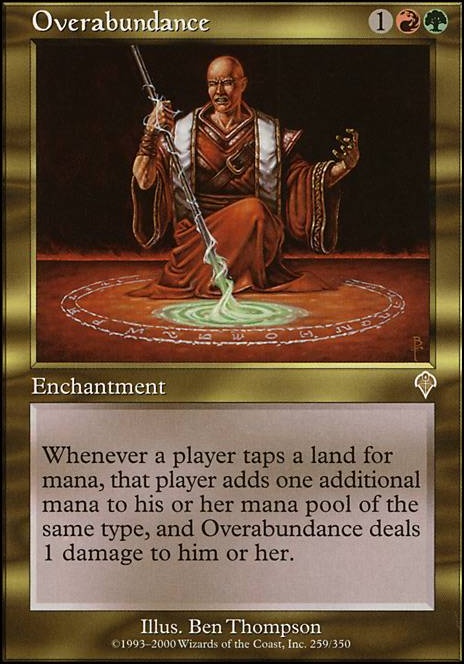 Whenever a player taps a land for mana, that player adds one mana to his or her mana pool of any type that land produced, and Overabundance deals 1 damage to him or her.

Hallar Back Y'all
by Secretmeat 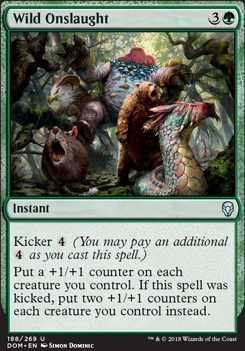 TriusMalarky, most of the cards that I am mentioning are very expensive (such as Akroma's Memorial or Vedalken Orrery), have never been printed in the modern card frame (such as Dromar, the Banisher, Book of Rass or Overabundance), or both (such as Rhystic Study) so I feel that there is nothing wrong with desiring reprints of them; perhaps, if I mention them sufficiently, an employee at WotC may see my posts and realize that there is a desire for those cards to be reprinted.

At this point, I admit that I am essentially mentioning random cards that I would like to see reprinted, but Overabundance is a great card that could use a reprint.

Qolorful, that makes sense, but Overabundance would lower your decks mana curve compared to Manabarbs, if only by a small amount.

DemonDragonJ on Need suggestions for this new â¦

I posted on the deck, itself, but I shall post, here, as well.

First, this deck definitely deserves an upvote for its name!

Have I already mentioned Overabundance in this thread? That card should definitely be reprinted, not be cause it expensive, but because it would look great in the new frame style.

Tamanoa itself in my opinion is a fine commander, as long as the playgroup accepts it's use, much like the Nephilim in that regard. That's one thing. (IIRC it's one of the few creatures they've legitimately said they wish had been legendary when they made it -- Tamanoa is an important entity in the Ice Age/Coldsnap Saga)

Playing stax in a social, casual manner is just... Ugh. There's slowing down the game -- No issues with that, things coming in tapped and the like, there's creating hurdles and restrictions -- Prison, hatebears, additional mana cost effects and such, and then there's just being needlessly douchey with full-on, hard stax.

Stuff like Overabundance and Manabarbs in Tamanoa is expected, it's part of the fun you can get value off of them for once instead of it being a race against time to ramp hard and win (which is it's own kind of fun, to be fair).

If he doesn't understand WHY he's being hated out of the game, you need to be as clear and frankly blunt as possible -- "Playing against this deck and this commander IS NOT FUN.". Silver Bullets and playerbaiting is only going to make the situation worse. At least by being honest and not resorting to underhanded methods you're justified if he ever starts badmouthing you.

At best, being honest and asking him to build something/anything else for a change might be beneficial both for your play environment and to the player himself. It might take a while, or be a very gradual change (like him playing GAAIV for a while...) but some change is better than a bad one.

If he doesn't respond well to your honesty and concern, then... I'm sorry, this person might not be good for your playgroup.

Pervavita on EDH Deck based on Voting

I think in this your looking to manipulate the table to do what you want even when giving them choices so I would look at the most resent Commander preconstructed decks and see what fun they have for you.

Goad as a mechanic also looks good as your opponents get to chose who to attack but it's not you so thus it's really what you wanted.

O-Kagachi, Vengeful Kami would play into this as your opponents aren't going to chose to attack you even though they do have the choice too. It also works in that you get all the voting cards. Toss in an Assault Suit and now the Kami swings every ware but at you and well watch the mayhem unfold.

Xantcha, Sleeper Agent also gives your opponents something to do that should fit on theme.

Overabundance should help ramp you but also gives your opponents choices that aren't always the best for them.