Sliver creatures you control have "Tap: Add one mana of any colour to your mana pool."

The First Sliver Storm
by kalko 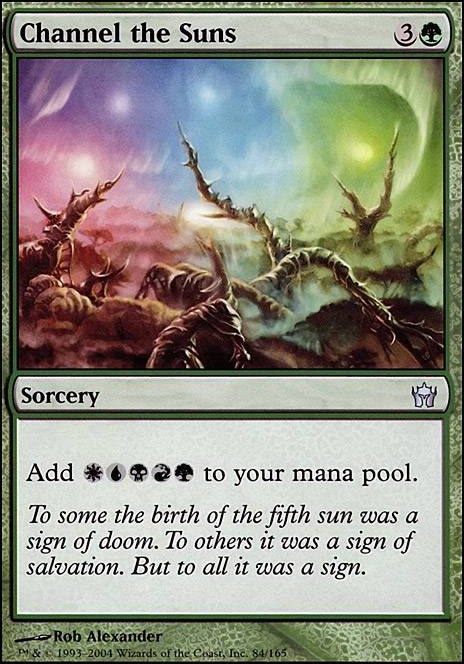 If you can afford them, Aether Vials are a must. Also, maybe go a little higher on 1-drops, you've got 9 but since this is aggro you should be running more. Maybe just cut 1-2 higher costed slivers for a couple more 1-drops. You can probably cut 1-2 lands and some high cost slivers for the Vials.

You could also take the Manaweft Sliver and Gemhide Sliver path. Add 4x Blur Sliver and those and you can go t1 One drop - t2 mana sliver - t3 haste sliver, dump your hand.

Up to you, but slivers really benefits from the speed boost that either/both of those options provide.

So, I don't know if you've had time to update this list of late, but I would like to make some suggestions, and maybe what to cut for them. An old add that I was disappointed not to see was Manaweft Sliver as its redundancy, and maybe Homing Sliver since you're running a decent amount of the Sliver lords. Speaking of, I would play Cloudshredder Sliver over Bonescythe. Two keywords, one being evasion, is better to me over double strike. Lathliss, Dragon Queen over Utvara Hellkite, as it costs two cmc less and does something similar. I'm also going to run Najeela, the Blade-Blossom and Yuriko, the Tiger's Shadow.

If you aren't opting for a Food Chain type of line with The First Sliver then there are often more capable sliver commanders, especially for budget decks or more casual settings. Sliver Overlord does lend itself to execution of the self contained sliver based infinite combo line. Tutoring for Heart Sliver, Manaweft Sliver, Basal Sliver, and Sliver Queen and getting them into play allows you to generate infinite mana by making a new sliver, taping it for mana, saccing it for mana, and then using the to make another new sliver and repeat the loop. From here there are any number of ways you could choose to win with Sliver Overlord, just making an infinite army of slivers, melting face with a something like Acidic Sliver, or drawing out the whole deck with Mnemonic Sliver. Some of your friends might not like the power level of this line of play if the group is more casual, but without a consistent means of engaging the cascade ability of The First Sliver from the command zone a swap to this as the primary line of play for the deck would certainly improve performance and consistency. Training Grounds and Biomancer's Familiar are good support cards to include to facilitate cheaper ability activations.

1.tap Gemhide Sliver add one mana of any color