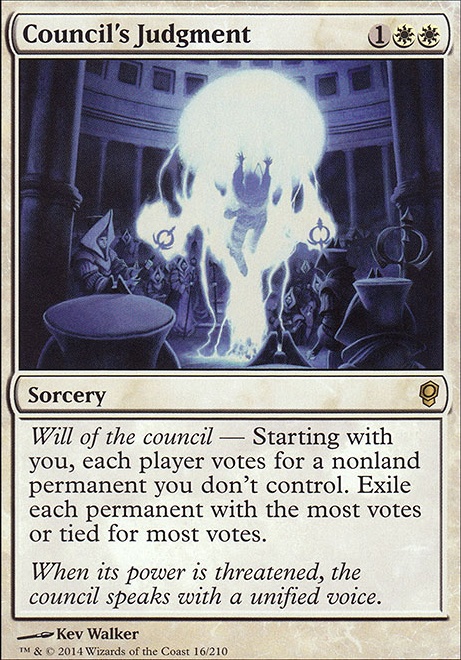 Will of the council â Starting with you, each player votes for a nonland permanent you don't control. Exile each permanent with the most votes or tied for most votes.

Council's Judgment occurrence in decks from the last year

TypicalTimmy I kinda feel like you gave up on balancing this Timmy creation.

It's a 4 color Planeswalker, true, but is only 5 CMC. It starts with 5 loyalty, which is fair considering the previous.

The +2 is acceptable but is in a rather good state, as +2 is strong on the defensive side and the ability is not bad if you build for it.

The -4 is completely unacceptable. I don't know if it is omission by accident or purpose, but the lack of target makes this a triple Council's Judgment without the voting, and that in itself is almost ultimate worthy. That you can do it from the start and the PW still lives is just bonkers! Even if it was meant to say target, a triple Oblation without the drawback (AND the ability to target lands!) is insane value and one of the best removal options in the game next to exile.

If you cast this on turn 4 (given you're green and likely can ramp just a tiny bit with mana fixing to make sure you get all 4 colors in time), you drop this 5 CMC and tug away 3 of your opponent's lands... What are they supposed to do? If they cannot counter the PW and hope the caster cannot counter it back with a Force of Negation or similar, they basically lost the game. It's way too swingy an ability and need to be restricted to nonlands, cost more (loyalty), be unavailable at start, and/or have less targets.

The -9 seems like a fool in disguise. Granted, most cannot bounce lands very easily, so you're at least a bit protected, but it would seem like you could put yourself at a major disadvantage. The best way to take advantage of this would be if you had Omniscience on the board, so you can effectively dump your newly acquired hand to secure the win.

The logistic part of the ultimate seems to be its biggest strike. Making tokens for every permanent you have would seem like a major memory issue.

xtechnetia on How Have Planeswalkers Affected this ...

I don't think it's wrong to have planeswalkers in the game per se, but I dislike the way they tend to warp games around them.

Because of the way planeswalkers work, they're guaranteed to get one loyalty ability off before passing priority if they resolve (barring other triggers etc). Usually one of their loyalty abilities generates card advantage, so even if immediately answered with a removal spell, you usually trade down in cards in doing so, unless you have the board presence to kill the walker without expending cards to do so.

This wouldn't really be a problem if:

I could go on and on, but you get my point. We have 1 mana removal for every other nonland permanent type, and those other permanent types are still widely played; the fact that we lack 1 mana planeswalker removal (Bolt doesn't count the way it does for creatures) is incredibly stupid.

That being said, I sort of understand introducing walkers. They can be fun and interactive (let's be honest, the vast majority of walkers may technically have the issues I've described, but are just bad enough on the whole that nobody cares about them), and the ones that are archetype-enabling ( Sorin, Imperious Bloodlord is a fine example) instead of just generic slam-me-down-if-I'm-in-your-colors bombs are, in my opinion, a positive influence on the game.

They also have the benefits of:

I think Liliana of the Veil has my vote for best powerful-but-fair planeswalker. She doesn't have insane loyalty numbers, she has BB in her mana cost (making her less splashable), the +1 is symmetrical (she's a build-around-me walker, not slam-me-if-you're-black walker), the -2 means she dies to a stiff breeze, and the ult, while powerful, isn't literally I-win-the-game.

@vileplume23 - I'm currently trying to reduce the CMC of this deck, so probably changing Diabolic Tutor with Demonic Tutor is an option for me.. Maze of Ith is very situational, and i have a lot of defensive creatures to deal with probable creatures that can kill me.. the only way i see that it can be useful is when my opponent steals Sun Titan for example and attacks me with it for a turn, then i can null the attack.. or if I'm against a voltron deck.. Council's Judgment is also situational.. I can see when i play this spell, that I can't even remove the nonland permanent that I wanted on the spot, if 2 or more opponents voted on another permanent.. politic-wise, it looks fun though..

@backdoorbonus - hmmm.. that's an interesting creature.. It can be another commander in the 99, that can recur itself to the 3rd card in the deck, but still.. It can also replace Zetalpa in the Tainted Strike + Zetalpa, Primal Dawn combo as a possible redundancy since it has double strike too.. thanks for the suggestion!