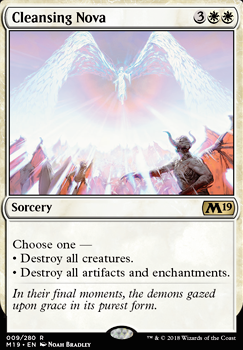 Cleansing Nova occurrence in decks from the last year

A Girl and Her Hyena
by VexenX

"I am become Death, the destroyer of worlds."
by ottokernberg I meant it as tokens that are not creatures, like battle-axe copies, treasures, clues, even food tokens (but that means only Turn into a Pumpkin and Witch's Oven and I wouldn't play them tho :S) since most boardwipes kill creatures, but not other things. However if your meta runs stuff like Austere Command, Cleansing Nova etc safe is even more relative.

P.S. Apparently chat is an option for premium users (which I'm not) so I'm sorry for the late response :S

Hour of Reckoning is still in my deck box as itâs great but I found Cleansing Nova to be more impactful, Iâm currently only running 2 wipes and I took out hour of R solely because I have a lot of core creatures that are not tokens.

As for the others I have a more âTallâ board state then wide. I have looked at an alternate ramp creature than Lotus Cobra but havenât found a sub I liked

Without analyzing the deck like crazy, one thing I would recommend is upping your basic land count. Fixing in 3 colors isn't as hard as you may think, and playing too many tapped lands will have a very real effect on the speed of your aggro deck, a deck type that is not favored in EDH. It would also mean your Myriad Landscape will function more reliably, but that's a smaller upside. Another small thing is perhaps removing Cleansing Nova for Austere Command. For one more mana you can cause significantly more damage to your opponents while leaving your own goodies untouched, or at least less effected. Other than that it's mostly smaller optimizations, like removing Ob Nixilis's Cruelty for something like Bedevil, Hero's Downfall, Terminate, or Anguished Unmaking. Honestly there's a lot you can go with, but it won't make a massive difference if your playgroup isn't on the competitive side. All in all, looks like a solid deck. Oh, and I just remembered you're more on a budget. Perhaps Mortify in place of cruelty :p