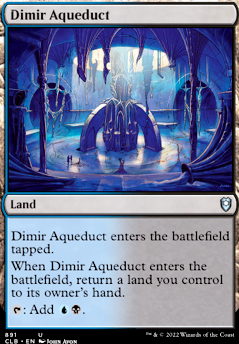 When Dimir Aqueduct enters the battlefield, return a land you control to its owner's hand. 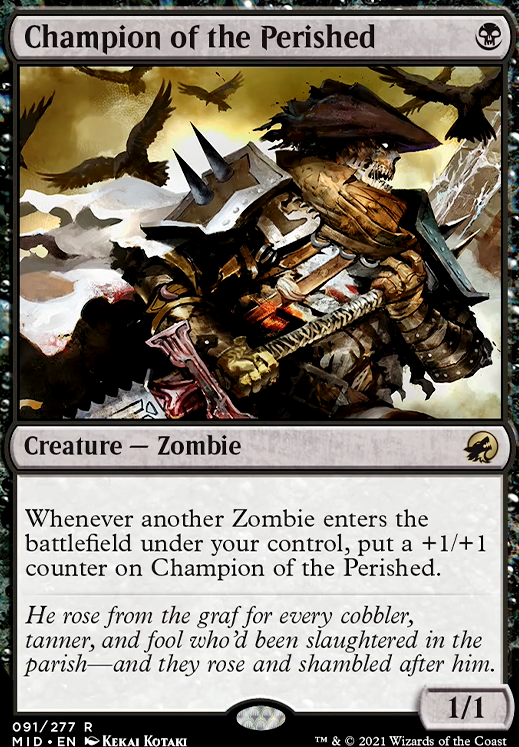 Kess Me, Mill Me, Thrill Me!
by Asgeren

Yeah, 21 is quite low by competitive standards even, where people often have an average MV of spells of 2 or less, and they usually care about hitting 1 or 2 lands. Like I mentioned above, you should probably be running quite a few more lands, for a 5 colour deck I'd 15-20 lands that can make Green mana, and aim for less of the other colours, because as long as you have Green mana you can cast Green spells to find the others, most people find this works pretty well. I would expect you'd want to hit at least 5 land drops most games for your deck to be 'firing on all cylinders', and according to https://www.mtgnexus.com/tools/drawodds/ which is a hypergeometric calculator, you should probably run almost (or even) double the lands. If you keep some ramp in your deck, you can shave lands down, but keep in mind that if most of your mana sources are 3 mana, you really do need to hit 3 mana to be doing anything. To hit your 3rd land drop reasonably often (for better than 70% chance of drawing at least 3 lands) you will want 33 lands. This will make it pretty hard to cast Tiamat 'on time' (turn 7), let alone early, which is almost always an asset.

If you end up finding it incredibly hard to cut cards, you can lower your land count a few if you run lands like Golgari Rot Farm and Dimir Aqueduct, as hitting one of these lands will mean you found 2 lands in a sense. These are risky lands I must add, because people can blow them up sometimes. I wouldn't expect mass land destruction, and you could certainly mention in Rule 0 that you 'don't like playing against land destruction'. You could even specify targeted land destruction, but most players don't run Strip Mine in every deck, and it's less common in more casual games. I wouldn't go below 30, even if you're running many of those Bounce lands.

Also, just noticed, you definitely need Basics, at least Forest should be in here, you can run as many of a Basic land (there are 6 of them, Wastes is the colourless one, which isn't a basic land type) as you want in your deck. I would think +5 Forests would be a good start, but you may need as many as 10. You probably want 1 or 2 of the other Basic types, that gives you enough Basic lands to find with ramp spells.

The Land of Confusion

Though they do enter tapped, Iâd recommend bounce lands such as Dimir Aqueduct and Simic Growth Chamber as they basically give you an extra landfall trigger on a single land.

Neotrup on Dress Down interaction

Fortunately it's not a new ability, and Humility has been around for a while. Unfortunately the rule I referenced was changed when Ixalan was released, so you can find plenty of forums saying creatures will enter with the counters and plenty saying they won't, and both sides were right when they said it. To this end, I'd refer you to the Wizard's page that discussed this rules change: https://magic.wizards.com/en/articles/archive/news/ixalan-comprehensive-rules-changes-2017-09-28

The relevant part being: "So this rule's changing. Now, to determine what replacement effects will apply to a permanent entering the battlefield, you look at continuous effects that modify that permanent's characteristics coming from the permanent itself along with those that already exist and will affect that permanent. Dimir Aqueduct enters the battlefield untapped under Blood Moon. Humility causes creatures with modular to enter without their +1/+1 counters. Metallic Mimic can distribute +1/+1 counters happily to your army of Ferrets under Arcane Adaptation."

I actually think those are great ideas. While I might not add those specific two lands you mentioned, you made me remember Izzet Boilerworks and Dimir Aqueduct which allow me to reuse the scry from the temple, the exile from Bojuka Bog, get more energy from Aether Hub and both should be a bit cheaper than Shivan Reef.

I probably won't be pivoting to but I'll make sure to include a specific section in this primer about a sultai variant. Ayula's Influence isn't as fast as Infestaion, nor as splasable, but has some other neat jank tech.

It probably didn't function very well because this deck has never been anything other than a meme. Though the Seismic Swans version actually has a few top8s. 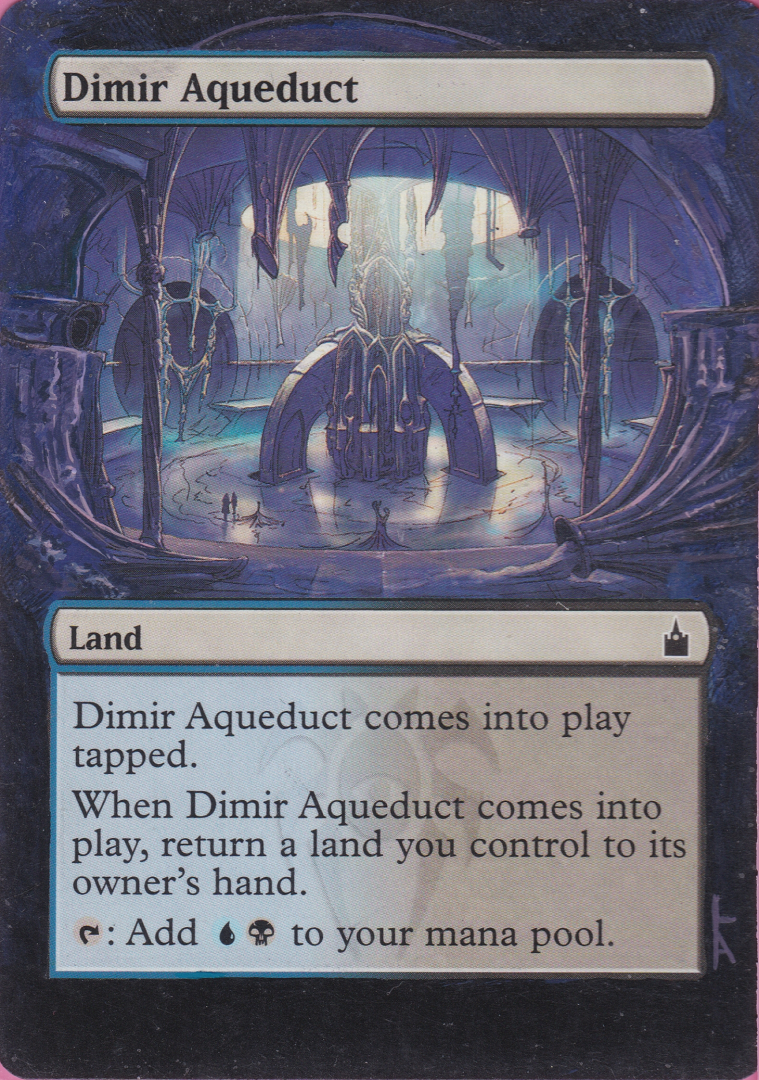 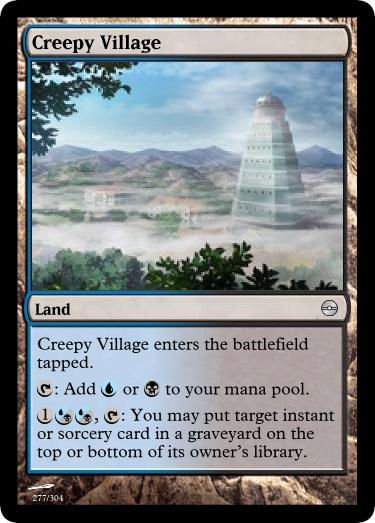 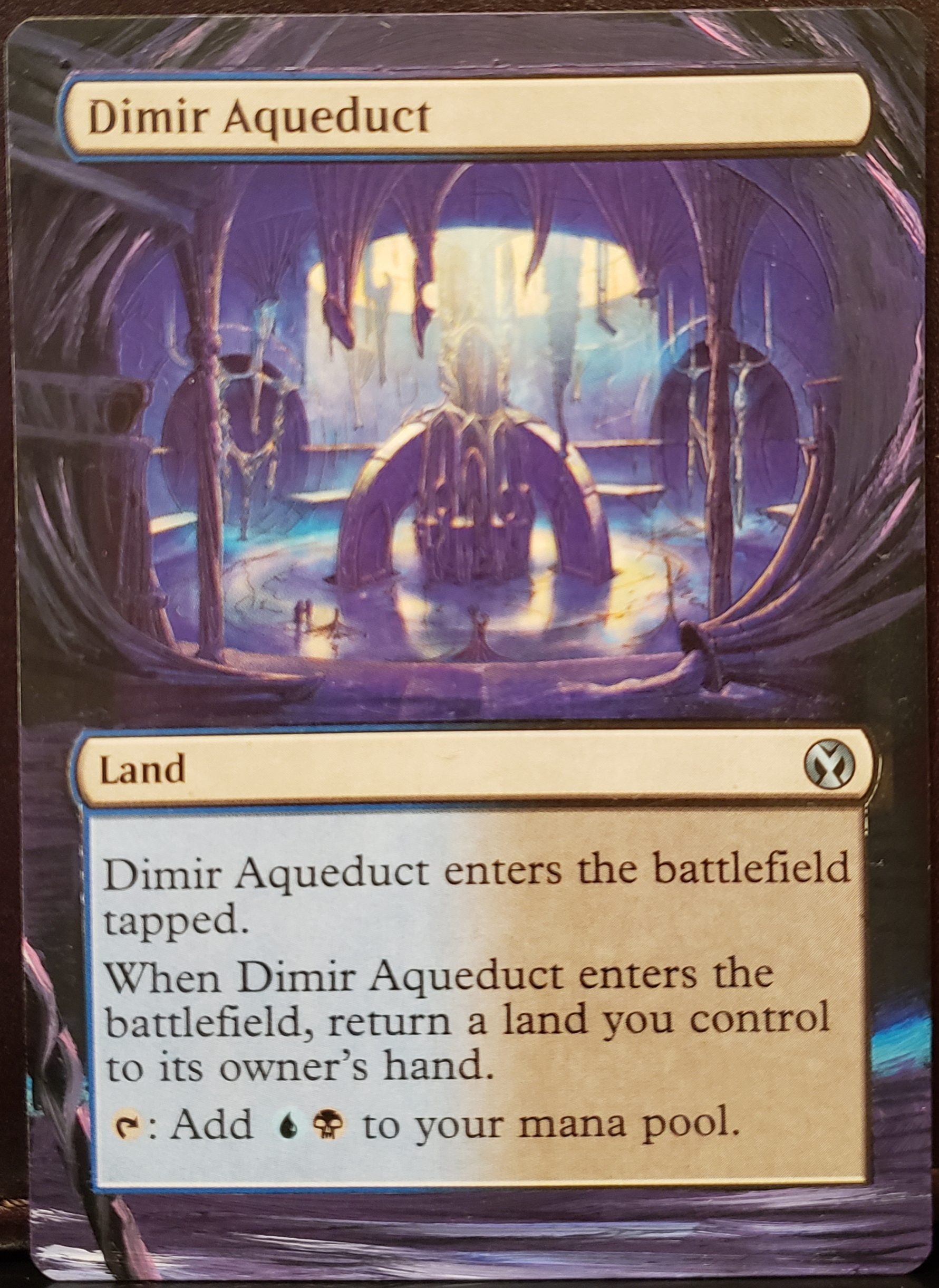 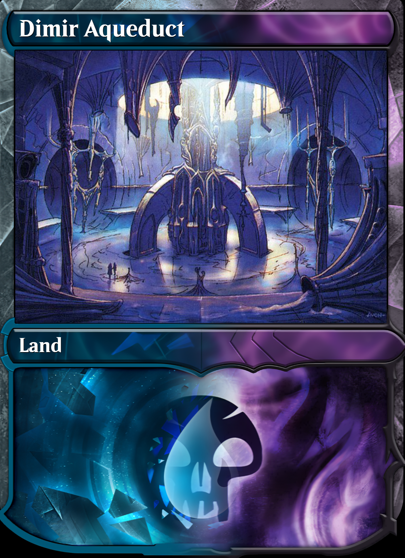