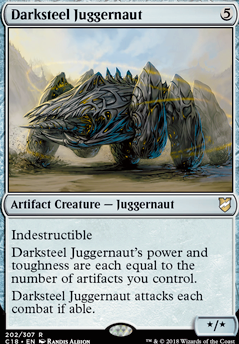 Darksteel Juggernaut's power and toughness are each equal to the number of artifacts you control.

Rocks Fall, Everyone Dies
by Thicccccdad

Ooh, very intriguing "diamond" tribal, with plenty of flavour tying it all together! Wasn't familiar with the Diamond Knight and friends, and when assembling in paper, I was pleasantly surprised to discover Plains which is also illustrated by Alayna Danner, and feels like an extension of the diamond-panorama.

I've already got a Darksteel Juggernaut focused deck, so I made a substitution with Bronze Guardian, which matches the light-refraction themes at play and hopefully fulfills similar functions. Kudos!

Building an Akiri deck I'm on the artifact matters path, perhaps this utility can improve the flow if you find it lacking in places, and increase the value of X

rb701 the whole point of this deck is to fish out World Slayer and blow everything up. A lot of my stuff is indestructible because it would survive that.

Magnetic Theft is a combat trick. Allows me to throw worldslayer on any unblocked creature before combat damage, either my opponents or my own.

Darksteel Juggernaut is basically the same thing as cranial plating.

The red green colors are specifically only for magnetic theft and Ancient Stirrings.

I also think you may have been looking at an outdated version. I updated the list today and removed all of the "sword of" cards... I came to the same conclusion you did.

Golgari Guildgate could probably be swapped for Command Tower . Other useful cards might be Darksteel Juggernaut , Bonehoard , Shambling Suit , Steel Overseer and Traxos, Scourge of Kroog . There's some pricey versions of some of these cards for a few bucks or more but there's also 50 cent versions.

Flow of Ideas is great card draw in mono-blue. Slinn Voda, the Rising Deep is also a Whelming Wave (although it's a creature and not a good polymorph target), and so is Scourge of Fleets . Volition Reins instead of Lay Claim unless you're super attached to the cycling. Budget options instead of Blightsteel Colossus are Ixidron , Scourge of Fleets , Colossus of Akros , Broodstar , Darksteel Juggernaut or Stormtide Leviathan .