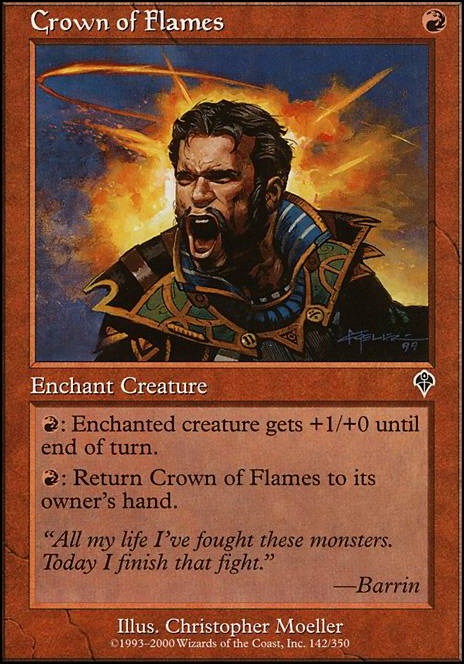 (Red): Return Crown of Flames to its owner's hand.

You should also include Crown of Flames . It works a lot like Grinning Ignus , however, it can give infinite mana/casts with Cloudstone Curio and can even give you a infinite ping combo with Firebrand Archer because it's a non-creature spell.

Love the way this is coming together. What is your opinion on running a line with Mycosynth Lattice or Liquimetal Coating and Clock of Omens ? Or how about running a copy of Crown of Flames ?

Just a few fun interactions would be:

These might be just some wishful thinking kind of combos, but I'm really digging this new commander.

Ghitu Firebreathing, Crown of Flames, can be recast, Dragon Mantle lets you draw a card, any of them would be slightly better than Firebreathing

Dizzying Gaze is useful against flyers, any red enchantment creature with bestow would at least give you a chump blocker if you boss dies

Thank you for your comment and for you ideas. I appreciate it and will follow your advices.

Unfortunately I had time to play just three games with this deck and twice my Birds of Paradise or Dryad Arbor got hit by a Lightning Bolt or similar card. I love Bloom Tender but it usually eats removal asap (any card that may generate more than 1 mana is usually hated in my meta). Anyway I need some chump blockers and if I use more mana dorks, some of them could survive .. I had some bad experience when I used to play Prossh in the same meta and at the end I had to avoid mana dorks as much as possible, otherwise everybody was killing my ramp.

Second Sunrise and Faith's Reward - both are great suggestions, I have Teferi's Protection in my collection, so it could be even better than any of the forementioned cards (since I have almost no ETB creatures). You are right with Swords to Plowshares , I will switch it immediately. Gaddock Teeg should fit in as well.

When I goldfished this deck the card draw was the biggest issue. When I have creature tutor and some enchantments, I am able to draw a lot of cards. In one of my other decks (Bant Enchantress Combo v2.1) I was using self returning enchantments to be able to draw some cards with enchantresses (when I had no enchantment in my hands). I am thinking about Flickering Ward - it would give me evasion (I may choose the color protection based on color of defending player's creatures) and with an enchantress on battlefield I may return it to my hand and play again. Crown of Flames seems to be another option as well. I am considering Runic Armasaur . It could draw a few cards in every game and 2/5 is quite ok for blocking.

Some other card draw possibilities:

This deck is my second / third deck which I want to play as maybe 75 %, not cEDH. Anyway I want to win some games and in all the games so far Uril got a lot of hate, because everybody was afraid what happens when he hits the field. Right now I want to avoid mass land destruction, but it maybe needed in the end. Realm Razer seems to be ok. The lands are not destroyed, but it's not possible to use them and if anybody has an instant removal, he may float some mana and then kill it.