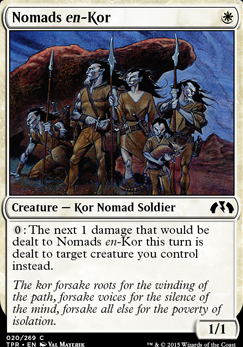 : The next 1 damage that would be dealt to Nomads en-Kor this turn is dealt to target creature you control instead.

Thanks a lot for the feedback on the deck TotesMcGoats!

Ive actually thought about replacing the Cephalid Illusionist + Nomads en-Kor combo since ive got few ways to assemble it besides drawing into it, especially after some more testing. Actually thought of Mind Over Matter and Ive bought a copy since and added an Idyllic Tutor to help out with it and to fetch some of the pillow fort pieces if needed. The idea of the deck is to be as passive as possible only interacting when needed and using the silver bullets wisely ((need to up the interactio a bit imo after testing).

I tried the "everyone draws X cards" and I'm not a fan of them but they are a great replacement for a more steady win and more budget friendly than trying to get a MoM.

On the Tidal Barracuda thing I prefer Leyline of Anticipation since its a bit harder to interact with and my playgroup does play a lot of creature removal and semi reanimation through Hall of Heliod's Generosity .

Thanks a lot for the feedback and I really do love your Kwain list! The playstyle has been a blast in my playgroup and others, Im really proud of the list.

Protean Hulk got worse with the banning of Flash, but it's still a fine "one card combo" in non cEDH environments. One of the go tos of you are in at least Bant is to tutor up Cephalid Illusionist, Nomads en-Kor and Thassa's Oracle, targeting the fish with your nomads ~30 times in response to the Oracle trigger, where nothing short of a Stifle can stop you from winning on the spot.

SynergyBuild on Bruna But Different?

Nah, go broke: Nomads en-Kor and Cephalid Illusionist to mill yourself out, putting Nexus of Fate

as your last card, so you attack, get every aura back, and get infinite turns.