: Gain or . Underground River deals 1 damage to you.

Cycling is a Lifestyle
by Murrow 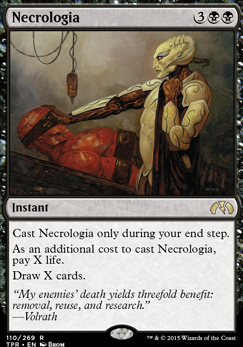 Vampire Hexmage doesnât particularly help you here, as it only interacts with Thing in the Ice Â Flip, and is only mildly faster than casting spells anyway (while leaving your counter-magic down, so likely more vulnerable to interaction). Iâd ditch it in place of Opt.

Iâd also suggest removing Dimir Charm for more copies of your other, better, counterspell options. The charm is just going to be too situation too often to be useful.

I think you prolly want to work towards the full playsets of all of Darkslick Shores, Underground River and Watery Grave - your deck feels super-dependant on having access to both BB and UU on turn 2. If you can afford Polluted Delta, theyâd obviously help too.

Underground River is something I will definitely add. I've just been led to believe (perhaps brainwashed) that artifacts to play your commander earlier are a must. I'm not sure how you generally feel about that. Darksteel Forge is undoubtedly a great card it just feels like I'll be dead 10x over before I get to cast it most of the time. I agree 100% about the equipments. I had been running Whispersilk Cloak but what I got to thinking was that there were so many unblockable dudes already that I could get away with putting something like Sword of the Animist on an unblockable nerd and be able to get that extra land no matter what. I was thinking maybe Sword of Body and Mind would be another one to add? Bitterblossom is my #1 most desired card for this deck for sure. Im hoping to maybe be able to trade for it or something haha bc 50$ is a lot for one card for me. I generally won't buy a card if its above 20. Stuff like Force of Negation I just got lucky and opened up. I understand that dimir rogues may not be the best against aggro and Voltron. The people I play with are super lame. The only deck I have that's good against what they play is my Sacrifice deck with Yawgmoth, Thran Physician . It annihilates all the 1/1s so of course I'm not allowed to play it -.-

Yeah anytime! I mentioned cutting ToDom bc Underground River does that same thing and is a land so you most likely won't have to worry about it leaving the board. If your playgroup blows up a lot of things then S.Relic makes sense. You could even run Darksteel Forge and give all your artifacts a little more protection if that's something you have to worry about in your group. Hey if Mesmeric Orb works for you then keep at it! It can certainly do whacky things in my Phenax deck. It's a dick card and I love it lol. I don't think Sygg would be the better option as a commander. Keep Anowon and just make sure you start flooding your board state with rogues to keep pestering your opponents. I really find that giving one's rogues equipment that not only aids in their power, but helps in other ways is kind of the best. Like I said, gotta make them unblockable! I know Bitterblossom is up there in price, but if that's something you can save up for, it's fantastic. It can get quite degenerate with how many rogues you'll start producing, especially if you equip them with one of the "Sword ofs". If your group runs fast decks like Goblins/Elves then Anowon may have a hard time with winning no matter what cards you run. I won with my Krenk(o) That Soulja Boy deck VERY quickly. Krenko out on turn two is mean enough, but turn one...that's just rude. If you're going to keep trying your Anowon vs those aggro decks then absolutely keep all the board wipes you can! D.Voidwalker can be found cheaply right now, depending, and I think makes a great addition to any Rogues deck. Thassa is great too and I also run her. Gotta get that scry!