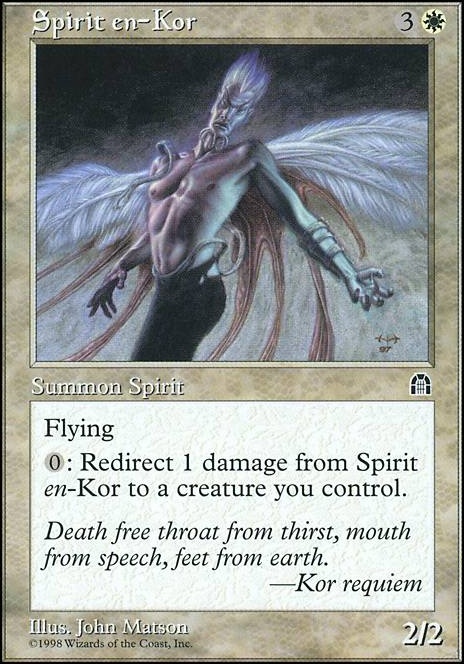 : The next 1 damage that would be dealt to Spirit en-Kor this turn is dealt to target creature you control instead.

She's NOT nice
by Bennybenben 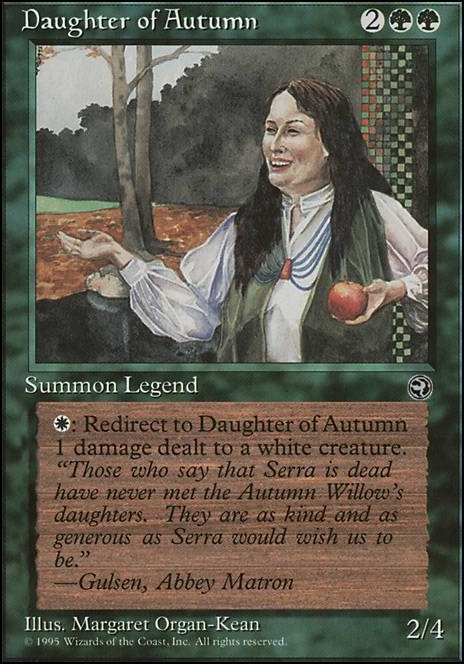 She's NOT nice [OLD]
by Bennybenben

This was an incomplete Catti-Brie deck, and I'm in the process of transitioning to the glorious Archer-Commander we've been blessed with (as I'm sure many others are as well, judging by some weird suggestions cropping up on EDH-Rec). I'm especially relieved about the in-built card draw.

If Spirit en-Kor works like I imagine, then it could be a really fun and unexpected fit! Let's say some spell tries to shoot it 6 damage, you could redistribute all 6 as separate ping triggers on enrage creatures? That'd be huge. And hilarious :D

I haven't had many ideas yet that I haven't seen elsewhere already, but I was a little surprised that while good ol' Shadowspear did appear often enough, the more budget (and more importantly, single redundancy for this important effect!) Bonds of Mortality is nowhere to be seen. It replaces itself, and makes sure you can deathtouch ping even creatures that would be resistant. ...though of course, with you having basically founded a whole new archetype for this commander, you don't even have deathtouch effects in your list. Makes sense, it would just risk killing the poor dinosaurs X)

What might be worth consideration, maybe: Gryff's Boon. Only one mana to apply it, but you can infinitely reuse it! Even if it's 4 mana. I love it when I draw a card and can think to myself "nice, that little cog is in place, no matter what happens". Except for graveyard hate, of course.

Also, I would love to hear any suggestions if you have any. Do you have a list?

I have thought of another thing you may want to try the en-Kor creatures Lancers en-Kor, Nomads en-Kor, Outrider en-Kor, Shaman en-Kor, Spirit en-Kor, or Warrior en-Kor. They give more damage sponges to redirect damage to your spite creatures, or if your don't have any of them in play your general. and as an added bonus Shaman en-Kor will also pull damage off of something else just to sink it where you want it anyway. Furthermore if you have a damage increase you can loop damge between them and your spite creatures till it is lethal.

I'm trying to put together a deck using Zada, Hedron Grinder as the basis for a deck where a target spell copies to everything else to create a win condition. My concept is to use en-Kor for redirect and Stuffy Doll as the kill. I could use any input/advice you care to give.

Here's what I have put together at the moment:4x Library of Leng

Have you considered Shared Triumph or Adaptive Automaton? Also, I realize Kiri-Onna can be recast, but it's 5 mana every time. You'd get more value out of Aether Gale or Distorting Wake. Even Man-o'-War is better. Exclusion Ritual is just bad for EDH. Spirit en-Kor doesn't serve a particular purpose. Drowned Rusalka is decent card draw, while Eidolon of Countless Battles is good with token creation (things like Spectral Procession and Midnight Haunting. Auras exiled with Brago can't enchant something that enters the battlefield at the same time that they do. Geist of Saint Traft would be good. Meteorite is too expensive and has little value. You're running white, so there are many options (like Banishing Light) that would probably be better than Spine of Ish Sah.